It’s hard to say whether the complete absence of light or its presence in unexpected places is more haunting. Driving rural Appalachian highways in the dead of night, you’ll see plenty of both, and as I white-knuckled my way around this turn and that bend headed for the Savage River and its wild brook and brown trout, I thought to myself, “This had better be worth it. . . . ”

Living in the West, I used to get chastised by other anglers for using only 8-1/2-foot rods. Everyone out here swears by 9-foot 5-weight rods. The reason I preferred the shorter rod was weight; it was just more comfortable to use the rod all day. Sure, I gave up a little in distance and line control, but it was a sacrifice that I was willing to make. And then along came Helios. At just 2 1/2 ounces, my 10 foot 4 wt. Helios weighs much less than any 8-1/2-footer I ever used, and now I can take advantage of the line control and the distance the longer rod provides. If you’re fishing spring creeks, tailwaters, or any situation where a dead drift is critical, this is the only way to go. You will catch more fish and save your shoulder at the same time!

A library budget doesn’t usually include tippet materials or flies, but it might, if students were checking out fly rods. At Lawrence Junior High in Fairfield, Maine, fly fishing has been a part of the curriculum since a large package, almost as tall as a twelve-year-old, arrived from Vermont. Eight fly rods and eight reels, complete with lines, transformed a fledgling. . .

Here is proof that a trout bum from the mountains of Northern New Mexico can find a few gems while feeling out of place on the Olympic Peninsula. After hearing steelhead stories for four years from Matt Cassel, I joined him for a four-day adventure on the OP last month with steelhead guru Rooster Leavens. They suggested I not shave for a couple days prior to the trip—somehow that would help bring good luck. They also suggested I not shower, again, for luck. And yes, wear the same shirt for luck. They warned me of rainy/cold weather. They were right, and fortunately, I had packed my. . . 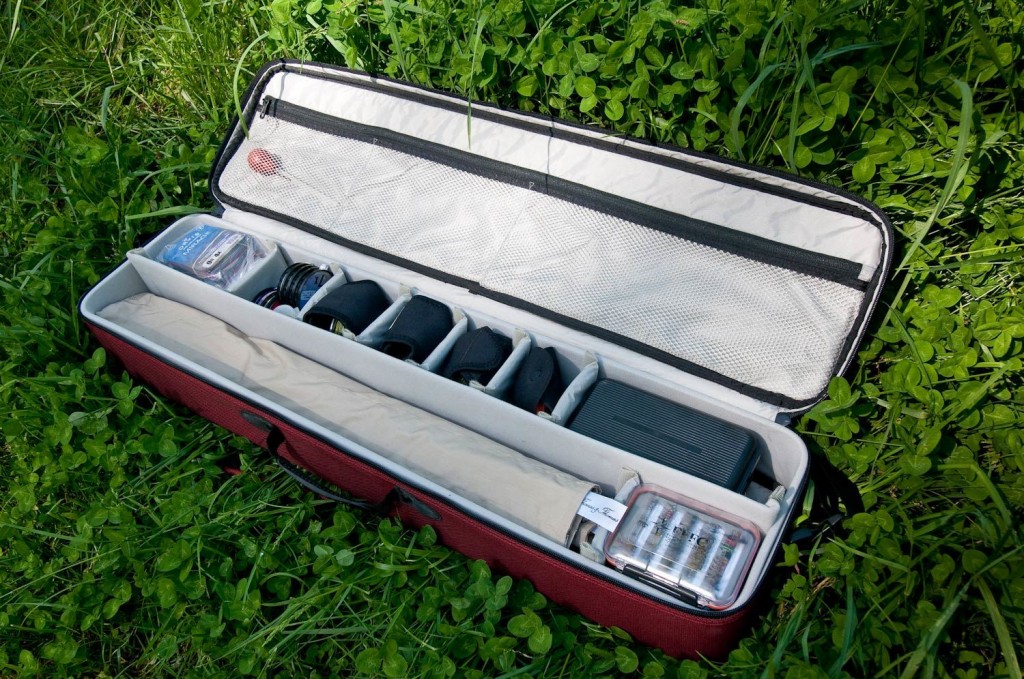 Kent Klewein of the blog
Gink & Gasoline posted this review of the Orvis Safe Passage Carry-It-All Rod and Gear Case:

This list goes on and on with what I need to pack for my guide trips and fly fishing travels. It’s astonishing how much room all this gear takes up in your vehicle once you’ve packed it all in, and the list above is only a partial list of what I need for my days out on the water. I still need waders, boots, fishing packs, net, camera, and enough room to transport my clients. Anyway I looked at it, I was in desperate need of finding a better way to organize all my gear. It was taking far too long for me to strategically load and unload my truck every day.

Recently, I ran across and purchased the Orvis Safe Passage, Carry-It-All Rod and Gear Case, and it’s completely blown me away with it’s ability to safely store an insane amount of gear in half the space. Everything I need is right at my finger tips and that keeps me organized and saves me a ton of time rigging up. From one fellow guide to another, since I’ve started using this gear case, I’ve no longer found myself turning around and heading back to the cabin for a critical piece of gear I forgot to pack. Below is a break down of what the Orvis Carry-It-All gear case can handle and I why I love it.

Read the rest of the review here.

When April begins, I start thinking about smallmouth bass. They will soon start making migratory spawning runs out of lakes, and some huge fish will be caught. It can be some of the most. . .

[Editor’s note: Back in March, we featured a great photo of a young angler named Matthew Owen, who had recently lost his father. Blog reader Joe Millner wrote a nice post to go along with it. Well, it seems that young Matthew has a lot of fans, since I got another email from a blog reader, Walter Haze, who suggested that we make Matthew a “Trout Bum of the Week.” Below are Walter’s pitch to me and then his post about Matthew Owen.]

The Pitch: I would like to submit a nomination to the “Trout Bum of the Week” (which I’ve noticed ya’ll haven’t had in awhile): Matthew Owen. I’m in the fly fishing club he started at his school and have witnessed first-hand the. . .

[Editor’s Note: Falcon’s Ledge guide Bryan Eldredge wrote this piece in March, but it’s just as relevant on the first of May.]

It’s snowing outside right now. In fact, it looks like we may get enough snow to require some shoveling. It will be only the third time all year, and it’s the middle of March. Temperatures last week got downright balmy here in Utah. Mid 60’s left little doubt that spring is on the way, and. . .

In the spring, daily conditions can change dramatically. Wednesday it’s cool, overcast, and the river is in great shape. Thursday you show up at the boat ramp to find that thunder storms in the high country have tributaries running high and pushing color into the main river. Such was the case for me last week. I arrived on the Bitterroot and discovered that, in the previous twenty-four hours, the river had risen 2,000cfs and visibility was. . .

Editor’s Note: Orvis is one of the Program Supporters for this year’s Bristol Bay River Academy. To learn more visit the organization’s website.

It started when I found myself standing alone in a pelting rain on a gravel airstrip in the Yu’pik village of Ekwok. I’d just taken a mail-run flight from Anchorage to the Bristol Bay, seated next to bulk boxes of rice and paper towels. I was already wondering how I’d get home when an old pickup truck pulled up moving no faster than a riding mower. Out popped Tim Troll of The Nature Conservancy, and soon after, . . .