Matt got stuck sitting on two Armstrong Spring Creek rods one Sunday last month. With the Yellowstone blown out (still) and folks canceling trips, we figured this would happen at some point. So, Matt said, “Let’s take Catherine and Elizabeth fishing.” I had doubts, concerns, and worries galore—mosquitoes, deer flies, 50-degree water, cold little legs and toes, boredom from not catching a fish every five minutes. I mean, this was one of the spring creeks, not exactly your first choice fishing destination for small children. I figured whatever happened, we’d be okay with a good. . .

Editor’s Note: This one needed a correction so big, I thought it worth a repost. In the original post on July 22, Captain Sigvartsen’s fish was initially listed at 13 pounds, when, in fact, it was 18 pounds. That raises the “Holy Moly!” factor to another level entirely.

We parked at Pelican Point on the East End of Grand Bahama Island. I was rigged and ready, so I was able to beat my buddies to the flat. Before I even got in the water, I looked down the sandy flat to see about eight fish coming toward me. At first I thought they were ‘cudas because of their size, but as they got closer I realized that they were the biggest bonefish I’d ever seen.

[Editor’s note: For the next few months, we will be featuring entries from Gordon M. Wickstrom’s The History of Fishing for Trout with Artificial Flies in Britain and America: A Chronology of Five Hundred Years, 1496 to 2000. In this chronology, Gordon marks significant events—the publication of seminal books, tackle developments, important social changes, the dissemination of trout species beyond their native ranges, etc.—on both sides of the Atlantic.]

Lisa Kaplan Gordon gives us the lighter side of fly fishing in Montana, and exposes one reason she (and perhaps many of us) goes out there once a year. 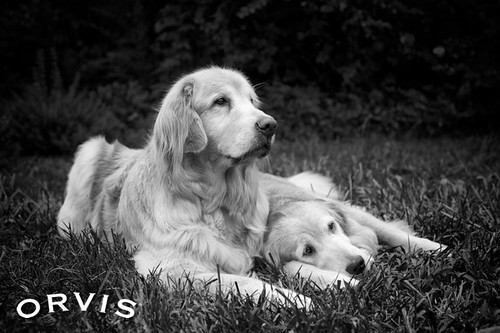 Throughout the years, dogs have benefitted from improvements in veterinary care. More are living longer as a consequence of improved nutrition, better vaccination protocols, and evolving standards of care in both general and specialty practices. If there is a downside to living longer, it is that more dogs live to so-called “cancer ages,” late middle age to geriatric. If a dog reaches ten years of age, it has a 50-50 chance of developing cancer. How can a rational treatment plan be developed?

Had anyone told me two years ago that I would be waking up at 5 a.m. to get down to the Tidal Basin and fly fish before work, or spending my days off trolling the C&O Canal with my boss, I’d have had them committed. Aside from the fact that the last time I’d done any fishing, I was still missing teeth and wearing a turquoise Power Rangers t-shirt, I had somehow gone 22 years living in Washington, DC completely unaware that you could, in fact, fish here.

Who doesn’t dream of just hitting the open road in an RV with good friends and some fly fishing along the way? Well, the women of Sisters on the Fly don’t just dream about it; they do it. It’s inspiring. And it inspires more than just me. The story of their treks made it into the June issue of O, The Oprah magazine.

Yesterday while floating the Kootenai River in northwestern Montana, Bostonians––and fellow Red Sox fans­­––Tom and Sue Ukena had a great morning sniping trout with long leaders and size 16 Pale Morning Dun spinners. During lunch, with bright sunshine and the heat of the day coming on, we decided the best plan of attack was to switch to big hoppers.

I shoved the boat out of the shade, felt the blast of heat.. . .

Driving toward the Powder River, I felt like a big ‘ol fat Labrador sticking his head out the window and slobbering down the side of the jeep. At this point I didn’t have a care in the world; I was just smiling! The history of this place is as intriguing as the wild trout that inhabit the water running through. . .