Kristi Miller, a Canadian scientist who published a study on the collapse of Canada’s West Coast salmon in the leading research journal Science has been muzzled by Ottowa’s Privy Council Office from speaking about the research. The research showed a possible link between farm raised salmon exposing wild salmon to disease.

If you are reading this post, you are very likely a dog lover, and a book lover as well, looking for a good read about one of your favorite subjects. Well,  Louise, a bookseller at an independent book store near our Orvis home offices put together a list of top ten dog books for summer reading for a great site eardog.com.

All Against the Haul is group organized to protest the construction of a permanent industrial corridor along rural roads in the Northwest and Northern Rockies, which oil companies will use for mega-trucking to get the Alberta tar sands. Renowned writers Rick Bass and David James Duncan collaborated on a book about this impact his proposed corridor could have on the region, and the world.

On Tuesday, we posted pictures of a monster brown trout caught by a novice angler on the Big Hole in Montana. She was part of a group of female anglers known as The Quality Chicks (check out their story over on the Women in Fly Fishing blog). Well, the saga doesn’t end there. Here’s another update from Wade Fellin, of Big Hole Lodge:

The EPA updated its site yesterday regarding ExxonMobil’s clean-up plan for the oil spill on the Yellowstone River, which, though it did affect ranchers and other landowners, has NOT affected fishing. In part, the EPA stated:

“Over the weekend, ExxonMobil delivered a draft work plan to EPA. The work plan contains seven elements. EPA has determined three of those elements require further clarification and scope definition by the company. EPA has instructed ExxonMobil to provide a revised plan within the week. Those three areas that will be addressed are the oil recovery containment, source release area, and remediation sections of the plan.”

UPDATE: Jason Elkins of Orvis Travel notes that fly fishermen traveling to Montana have little to fear from the oil slick. “Although this is a serious issue, trout fishermen may be relieved to know that the spill is located far downstream from any trout habitat. Anglers planning to fish in Yellowstone Park or on the Yellowstone River this summer will not be impacted by the oil spill.”

Wade Fellin, a fly-fishing guide at
Big Hole Lodge, sent us these great photos, along with an inspiring story of beginner’s luck:

Cheryl had been working hard on learning how to fly cast all morning. She had finally made her leader turn over consistently after lunch, when we saw an unassuming rise in an eddy. I rowed closer, and Cheryl made a perfect cast with a salmon fly imitation, executed a perfect mend, and BOOM!  She was soon landing this 24-inch Big Hole brown trout! 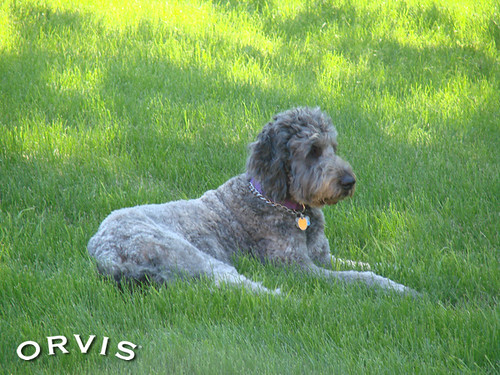 A New York Times blog post  today calls into question the idea of hypoallergenic dogs. According to studies that the blog references:

…there may be no such thing as a low-allergy or allergy-free dog, according to a new report. The study found that the quantities of dog allergens in homes with supposedly hypoallergenic breeds are no different from those in homes with dogs widely considered non-hypoallergenic.

Do you have a hypoallergenic dog to prevent allergic reactions to it. If so, have your allergies stopped entirely or do they persist? What do you think? Hypoallergenic dogs, fact or myth? Share your experiences with us.

The other day I got a letter from Robert Redford. No, he wasn’t solicting a film script from me. Instead, he was urging me, via his position at the National Resources Defense Council (NRDC), to take action against the threat of Pebble Mine to Bristol Bay, Alaska. Even though I have written a great deal on the Pebble Mine issue and contributed in every way possible to help prevent the mine and to bring exposure to the threat, I was greatly encouraged to see the materials from the NRDC arrive by mail. It means that the level of exposure is growing, and more important players are becoming involved.

Shortly after that package arrived, a colleague here sent me a link to an NRDC blog about the issue. It was written by Matt Skolgund and has the personal angle to which many of us can relate. As Matt wrote:

If this nightmare known as the Pebble Mine is allowed to go forward, it will be – take a deep breath – a 2,000-foot-deep, two-mile-long gold and copper mine with gigantic earthen dams built to hold back some 10 billion tons of mining waste. Roads will be built, and the mine will be smack dab in the middle of a known earthquake zone.

Pebble Mine will inflict irreversible damage on Bristol Bay, including the permanent destruction of dozens of miles of wild salmon habitat. That’s why NRDC has joined Alaskan Natives, anglers, hunters and other conservation organizations to fight this wretched proposal.

Mimi Matsuda is another outstanding wildlife artist who uses trout, salmon, and other fish species as subjects. She works in color pencil and pastels. Her work is currently featured in the Graceful Rise exhibit at the American Museum of Fly Fishing in Manchester, Vermont.