[Editor’s Note: This month, three trout guides from Hubbard’s Yellowstone Lodge have embarked on a steelhead trip through Idaho, Washington, and Oregon. They’ll be filing frequent updates on their progress. The anglers—all steelhead novices—are Eric Strader (from Missouri), Robert McCallister (from New Mexico), and Ted Morris (from Pennsylvania).]

Ted and I stayed in the camper for Christmas, because Robert went back to New Mexico for Christmas. We found a good campground called 3 Rivers near the Bogachiel and the Calawah rivers. Our plan was that we would be able to walk to three good fishing spots that were fairly close. Well…it rained the entire time Robert was gone, and all the rivers. . .

The attorney appointed by the Idaho Transportation Department to hear arguments against allowing “mega-load shipments” of oversize refinery equipment over highways through some scenic valleys along the Clearwater and Lochsa rivers has recommended that permits for four such shipments be issued to ConocoPhillips. Attorney Merlyn Clark said that he believes the loads can be transported safely and with “minimum inconvenience to the general public.” Opponents had argued. . .

Although everyone remembers Brad Pitt and Craig Sheffer as the stars of Robert Redford’s “A River Runs through It,” the image viewers are left with at the end of the film is the elderly Norman Maclean fishing alone on a Montana river as Redford reads the classic final lines of the book. Last month, Arnold Richardson, the actor who portrayed the older Maclean. . .

Here’s a good, simple winter-stonefly pattern from Connecticut-based guide Rich Strolis. Winter stoneflies are common across the country, so this pattern should work almost anywhere. Rich says he primarily fishes this fly deep under an indicator in the winter, usually as a dropper. . .

Last year’s hit fly-fishing film “Once in a Blue Moon”—about casting mouse patterns for huge trout in New Zealand is now online at Hulu.com. Husband-and-wife team Carl McNeil and Jeannie Ackland covered a lot of ground to capture glorious footage of big trout and mice, and the resulting film. . .

[Editor’s Note: This month, three trout guides from Hubbard’s Yellowstone Lodge have embarked on a steelhead trip through Idaho, Washington, and Oregon. They’ll be filing frequent updates on their progress. The anglers—all steelhead novices—are Eric Strader (from Missouri), Robert McCallister (from New Mexico), and Ted Morris (from Pennsylvania).]

The fishing on the Bogachiel River has proven to be tough because of all of the gear fishermen. Although there are a lot of fish in the system, it is hard to find spots. . .

Trinity River 2011 from Brannon on Vimeo.

This gorgeous film of fly fishing on California’s Trinity River will have you planning a trip to West Coast next season.

The Los Angeles Times explores the battle between Colorado conservationists and the Sierra Club over the organization’s support for a project, envisioned by the late artist Christo, called “Over the River.” The art installation would suspend panels of fabric over 5.9 miles of the Arkansas River, . . .

Montana fly-fishing guide, Simon Perkins is back home in Vermont for Christmas and joins Tom for a podcast on lessons learned the hard way. It’s the mistakes that make us wise, if we learn from them. Learn from Tom and Simon’s mistakes so you dont have to make them yourself!

What are some of your hard-learned lessons? Let us know in the comments.


If you cannot see the podcast player, please click this link to listen.

Our friends at American Rivers have sent out an urgent call to action, asking that conservation-minded voters call their Senators to tell them to vote YES on the America’s Great Outdoors Act. The act “would designate wilderness areas in three different states and add thousands of miles to the national trail system.”

Click “Read More” to see the entire alert and learn how you can help.

Dr. Aaron Adams of the Bonefish & Tarpon Trust posted this cool video of bonefish being released, and the film’s tagline says it all: “Because It’s More Fun than. . . 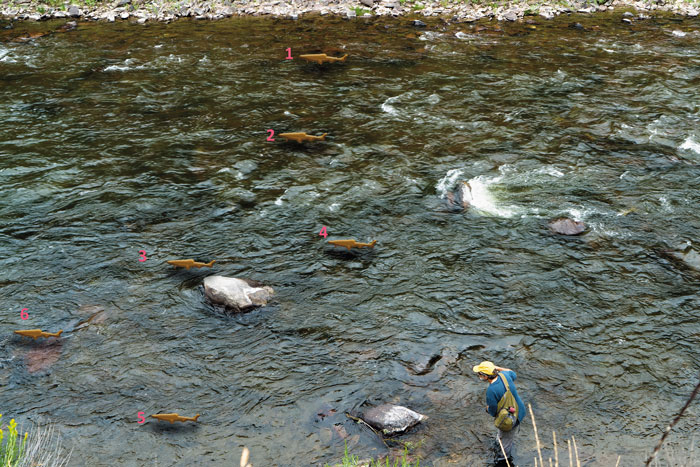 Here is a stretch of fast water, and the places you might expect to find trout during a hatch. Trout 1 and 5 have moved into slower, shallower water a...