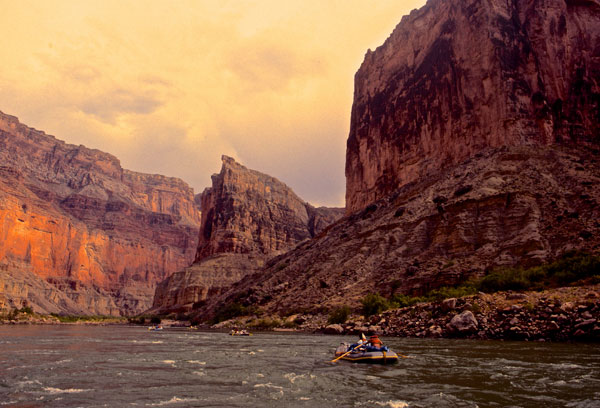 You want fries with this beautiful vista? Photo by Tim Palmer

Our friends at American Rivers announced their annual list of irreplaceable U.S. waterways that face serious threats in 2015. The list is a sad reminder of the fragility of our natural world while also heralding the importance of conservation work and of groups like the gang at AR.

At the top of the list is the Colorado River, more specifically the stretch running through the Grand Canyon, one of the Seven Natural Wonders of the world.

According to American Rivers, the canyon faces three serious threats, each with a key decision this year: the massive Escalade construction project in the heart of the canyon, pollution from uranium mining on the north and south rims, and expansion of the town of Tusayan that could deplete vital groundwater supplies. These threats would cause irreparable harm to the river’s unique wild character, clean water, and cultural values.

More alarming, the proposed Grand Canyon Escalade project includes a two million square foot development on the canyon rim, a tram delivering up to 10,000 visitors a day to the bottom of the canyon at the confluence of the Colorado and Little Colorado rivers, and riverside walkways, restrooms, a gift shop, and restaurant.

Bob Irvin, president of American Rivers, calls the plan “a travesty, destroying the very qualities that make the Grand Canyon such a spectacular life-changing experience, and an economic engine for the region.”

Listed along with the Colorado are familiar angling destinations from around the country, beautiful waters threatened by outdated damn operations, mining pollution, and sewage – just to name a few.

Visit the full list of America’s Most Endangered Rivers here.

2 thoughts on “America’s Most Endangered Rivers of 2015”