The Beaverhead is one of the Lower 48’s finest fisheries. Its upper reaches are a classic tailwater fishery, while its middle and lower stretches more resemble a spring creek, with clear water, cutbanks, and dense overhangs. With about 100 miles of floatable, wadeable, and fishable water, the Beaverhead supports a strong local recreational economy in Southwest Montana as boaters, fishermen, birders, and many others consistently arrive to enjoy this local treasure.

The Beaverhead also supports dozens of local ranches and farms, not to mention the City of Dillon’s public water supply. The important water and irrigation needs of the Beaverhead valley and its residents prompted the government to long-ago construct Clark Canyon Dam, which collects the Red Rocks and Horse Prairie Creeks, in essence the headwaters of the Beaverhead.

Unfortunately, this prize waterway—and the local economies and communities it supports—face a growing threat.

For the second summer in a row, the Beaverhead changed from clear and cool to markedly cloudy, with its banks and eddies covered by intense algal blooms, including harmful blue-green algae, above and below Clark Canyon Dam. Local outfitters found the Upper Beaverhead unfishable from Clark Canyon Dam to Barrett’s Diversion well into September, and one Dillon resident said he captured algae from his tap water.

For this reason, Montana Fish, Wildlife and Parks (FWP), Department of Environmental Quality (DEQ), and the federal Bureau of Reclamation (which owns Clark Canyon Dam) held a public meeting in Dillon in October 2015 to share what its scientists know and, of course, what they don’t know. 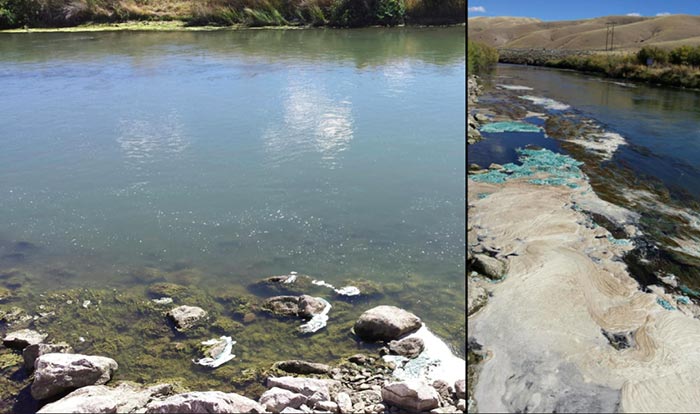 The algae blooms on the Beaverhead continue to cause problems.
Photo courtesy Upper Missouri Waterkeeper.

All scientists agreed that suspended sediment and unnatural algal growth caused the water clarity issue, but they do not fully understand what is going on in the reservoir to cause blowouts and severe algal blooms two years in a row. Nor could they explain why the worst turbidity was observed only as far down as the Barrett’s bulkhead diversion dam above the city of Dillon.

DEQ and FWP do know three items for certain. First, there are unnatural, elevated levels of nitrogen, phosphorus, and sediment entering the reservoir from Red Rocks and Horse Prairie Creeks. Second, the dam has reached its “trapping” lifespan after nineteen years of collecting sediment. Third and last, when the dam discharges water, it can contain unnaturally large concentrations of nitrogen, phosphorus, sediment, and temperature swings, creating nasty algal blooms like those of the last two seasons. So what’s to be done?

Well, Clark Canyon isn’t alone: it’s one of several dams throughout the state facing the issue of sediment “trapping capacity” and related water quality problems. A similar situation in the Ruby Reservoir during the 1990s resulted in fish kills and, ultimately, a fix involving dredging trapped sediment. Yet in spite of what’s known, our decisionmakers haven’t created any plan to address the Beaverhead’s summer algae problems, nor suggested anything concrete to address trapped sediment aside from the prospect of further study. The Beaverhead is too important—to agriculture, families, and fishermen—for endless discussions; we need to proactively address nutrient and sediment pollution now. 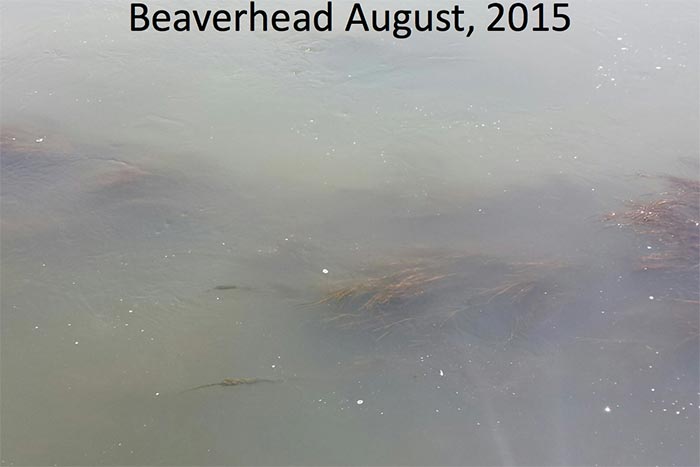 Fortunately, there are legal safeguards available to protect clean water. A new hydroelectric facility requires a permit from the Federal Energy Regulatory Commission, as well as a §401 water quality certification from the Montana DEQ. Both agencies must holistically review the proposal and place sufficient conditions in respective permits to protect local waterways. In light of the Beaverhead’s ongoing water quality challenges it is critical any new hydroelectric facility has, as part of its license, the duty to address sediment trapped behind the dam and related summer algae blooms. The problem, of course, is that we can’t always trust our government to do its job.

The time is fast-approaching when not only local Beaverhead Valley folks, but everyone who cares about the Beaverhead, can provide public comment on the proposed Clark Canyon hydroelectric facility. The Clark Canyon hydroelectric proposal is the public’s opportunity to stand up for the Beaverhead and demand our decisionmakers ensure any new hydroelectric facility protects local water quality, downstream users, fisheries, and proactively addresses a critical issue—the water quality threat posed by unnatural sediment trapped behind the dam.

There will be an opportunity in the coming months for public engagement when the Federal Energy Regulatory Commission (FERC) solicits public comment.

In the meantime, advocating for the Beaverhead River requires ample staff time and resources to hire expert scientists and no other advocacy organization is working on this unique issue. We encourage you to join Upper Missouri Waterkeeper as members and donate directly to this cause.

15 thoughts on “Anglers Must Stand Up for the Beaverhead”