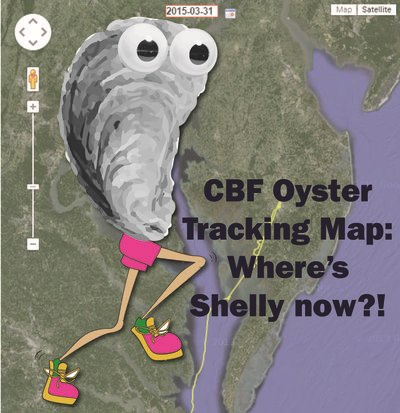 Where is Oyster Shelly off to?!
Photo by CBF

The following article, written by CBF Senior Naturalist John Page Williams, was first posted on the CBF website on April 1, 2015:

Oyster Shelly is on the move! After vacationing in the Caribbean Sea for the winter, she, along with the osprey, have come back home to the Chesapeake. We’ve been tracking Oysters Shelly, Rocky, and Pearl throughout their migration. Check it out . . .

APRIL FOOLS!!! While we know our favorite Chesapeake critters don’t go far, there is actually a period of about three weeks when oyster larvae can indeed move around. As Dr. Elizabeth North, Associate Professor at the Horn Point Laboratory of the University of Maryland Center for Environmental Science says:

“Although adult oysters remain fixed in one location, their eggs and larvae spend ~3 weeks as free-swimming plankton in the water column. During this planktonic stage, the young oysters pass through different stages of development, growing from fertilized eggs, to trocophores, to veligers, and finally to pediveligers. The pediveliger stage is the stage at which larvae search for suitable substrate to which they cement themselves, leaving the water column and becoming fixed on the bottom. This “settlement” of the larvae signals the end of the larval dispersal stage and the beginning of the juvenile stage. A suite of physical and biological factors influence larval dispersal and subsequent oyster larvae settlement. Circulation patterns are controlled by tides as well as freshwater flow and wind which can change between years, months, weeks and even days. These patterns, and differences in larval behavior, influence the direction and distance that larvae could be transported and the location where they ultimately settle.

“To predict oyster larval dispersal, we used two numerical models (i.e., computer simulations): a particle-tracking model and a three-dimensional hydrodynamic model of Chesapeake Bay. The coupled bio-physical modeling system has the ability to move particles due to currents velocities and turbulent mixing, and includes algorithms that give the particles “oyster larvae-like” behaviors. We use circulation predictions from five years in order to capture a range of physical conditions that likely influence larval dispersal. In addition, we used the best estimate of suitable present-day oyster habitat (oyster bars) and information from laboratory studies on larval behavior.”

Visit Dr. North’s website to see her model of oyster larvae distribution in wet, average, and dry years. Note that she developed these animations seven years ago, when Maryland and Virginia were wrestling with the question of whether to introduce a non-native Asian oyster to the Chesapeake. Dr. North’s research played a valuable role in the decision to concentrate restoration efforts on our native Eastern oyster, Crassostrea virginica. Thus the Eastern Oyster Animations are the only ones that apply to our Bay today. Remember that female oysters spawn huge numbers of eggs, and that larger oysters, clumped together, send out exponentially larger numbers. Mortality is high, but the more we concentrate their numbers, the faster the stocks increase.

The good news in these simulations is that they give us a flavor of how resilient our oyster can be if we understand its behavior and habitat needs as a species. With intelligent restoration efforts, we can once again rely on its reefs for natural water filtration, rich fish/crab habitat, and succulent seafood.

The Chesapeake Bay Foundation Oyster Restoration project is the recipient of an Orvis Customer Matching Grant. Find out how you can help save the oysters and the Bay.