Last Friday, the Environmental Protection Agency released a revised version of “An Assessment of Potential Mining Impacts on Salmon Ecosystems of Bristol Bay, Alaska.” This is what’s called the “second external review draft,” and the agency will accept public comment on it until May 31, 2012.

According to the EPA, key changes include:

Read the full press release from Trout Unlimited’s Save Bristol Bay Coalition below. And if you’re not completely up to speed on the issues involved, watch the “Alaska Gold” episode of PBS’s “Frontline” at the top of this post.

Click here to learn how to make your voice heard. 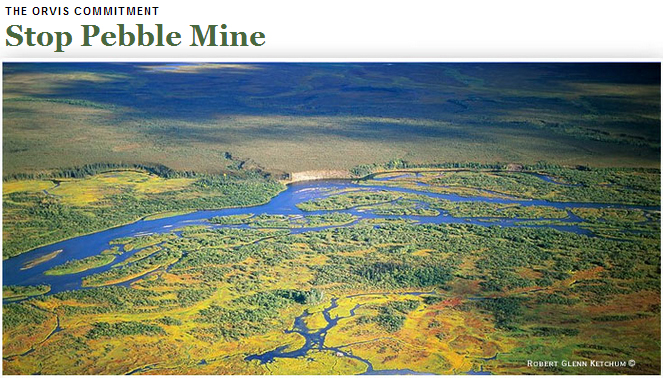 EPA WATERSHED ASSESSMENT SHOWS CLEAR NEED FOR CLEAN WATER ACT PROTECTIONS FOR BRISTOL BAY; PEBBLE MINE THREATENS 14,000 AMERICAN JOBS
ANCHORAGE – Sportsmen, Alaska Natives and commercial fishermen are heartened the EPA has released its updated Bristol Bay Watershed Assessment and initiated a public comment period, representing one of the last steps to protect Bristol Bay, Alaska, its world-class sockeye salmon fishery and 14,000 American jobs. The Assessment evaluates large-scale hard rock mining such as the Pebble Mine, which is proposed by two foreign mining conglomerates. If built, the Pebble Mine will generate up to 10 billion tons of toxic waste at the headwaters of one of America’s most productive fisheries.

“The science is clear: developing Pebble Mine will harm salmon and destroy streams even if nothing ever goes wrong at the mine,” said Tim Bristol, director of Trout Unlimited’s Alaska Program. “Pebble is far bigger and more threatening to renewable resource jobs than any other mine proposal in Alaska and it’s planned for the worst location possible: the headwaters of Bristol Bay. Clearly, the time for action to protect Bristol Bay under the Clean Water Act is now.”

EPA’s extensive scientific assessment – based on Pebble’s own documents and peer reviewed twice by a panel of independent scientists – found that even without a major disaster, the proposed Pebble Mine would destroy up to 90 miles of salmon streams and up to 4,800 acres of wetland salmon habitat. The agency’s due diligence also includes an earlier public comment period and eight hearings in two states. Already, the threat of the toxic mine has led to widespread economic uncertainty and suppressed job-creating investments in the commercial fishing industry.

“Bristol Bay’s 14,000 jobs and all the people who depend on its clean waters can’t wait any longer,” said Chris Wood, President and CEO of Trout Unlimited. “The Obama Administration has the responsibility under the Clean Water Act to protect the people, jobs and renewable resources of Bristol Bay now.”

Anglo American, a foreign mining company of luxury metals with a record as one of the world’s biggest polluters, forms half of the Pebble Limited Partnership, which has said it plans to file a permit application for the mine this year. Its partner, Northern Dynasty, filed detailed plans with the SEC to build North America’s largest open-pit mine and the world’s largest earthen dam in Bristol Bay, Alaska, home to America’s most productive salmon streams.

Several representatives from the Save Bristol Bay Coalition were in Washington this week to urge the EPA to quickly release its updated draft Bristol Bay Watershed Assessment. They are part of an unprecedented, bipartisan coalition of lawmakers, more than 900 hunting and fishing groups and businesses, 26,000 retail food stores, 225 chefs and restaurant owners, and 22 jewelers like Tiffany and Co. that believe Bristol Bay should be protected. Nearly 60% of Alaskans and 80% of Bristol Bay residents oppose the construction of Pebble Mine, particularly Alaska Natives who fear the destruction of their 8,000 year-old culture.

2 thoughts on “NOW Is the Time to Comment on the EPA’s Updated Bristol Bay Watershed Assessment!”