The Maryland Department of the Environment (Bureau of Mines), Western Maryland Resource Conservation and Development Council, Maryland Department of Natural Resources, and Trout Unlimited collaborated in implementing this project through the Eastern Brook Trout Joint Venture. The EBTJV is a unique partnership between state and federal agencies, regional and local governments, businesses, conservation organizations, academia, scientific societies, and private citizens working toward protecting, restoring and enhancing brook trout populations and their habitats across their native range.

Aaron Run was recognized as a National Fish Habitat Partnership “Water to Watch” in 2008 and has since undergone a restoration effort through installation of a limestone doser, which will help to maintain natural pH levels in the stream and leach beds in the headwaters. These efforts are helping to restore water quality conditions in four stream miles. In addition, the Aaron Run restoration has sloped 300 feet of stream bank to reestablish the natural stream channel, replanted about 20 acres of native riparian vegetation, and created a stream-side wetland area.

With the habitat restored, brook trout have been reintroduced to the stream and a population, once lost, is returning to Aaron Run. This will reconnect the tributary population to mainstem populations of brook trout in Savage and North Branch Potomac rivers and will enhance recreational fishing opportunities for the future. 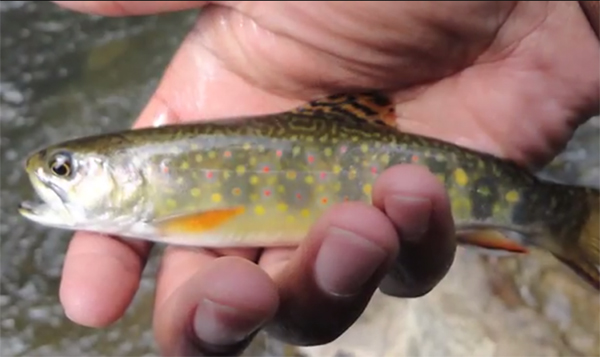 3 thoughts on “Video: Bringing the Brook Trout Back, One Stream at a Time”