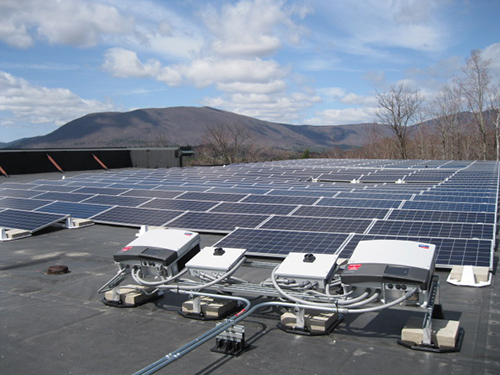 What better time than Earth Day to announce the installation of solar panels at Orvis corporate headquarters in Sunderland, VT? The Orvis Company has partnered with New Hampshire based solar developer and financier, SunRaise Investments, for the installation of a 75 kilowatt solar array.

Occupying 12,000 square feet of the building’s rooftop, the array is anticipated to generate approximately 20% of Orvis’ electricity needs. The environmental benefits are both significant and measurable, with each year the solar panels saving nearly 70,000 pounds of coal from being burned or 7,200 gallons of gasoline getting consumed.

“The entire construction process went very smoothly with little to no disruption to our occupied facility. Now, instead of just keeping the rain outside, our roof space produces electricity for us. A win/win for us all,” said Bruce Woodruff, Manager of Orvis Vermont Facilities.

Development for the project began in 2015 but was put on hold due to the Vermont solar program reaching its cap in late 2015. In July of 2016, when the program cap was lifted, Orvis and SunRaise re-engaged and moved forward on development of the project. The array was then constructed in the Fall of 2016 and placed in service in December.

SunRaise provided a solar equipment lease agreement to Orvis, which was formally entered into in September of 2016. Under this agreement, SunRaise pays for the cost of the solar array and Orvis is charged a monthly lease payment in exchange for receiving the solar generation and associated electricity credits.

“In addition to substantially reducing our carbon footprint,” said Ken Smith, Vice President of Customer Operations, “we will see a proportional reduction in our monthly electricity costs that allows us to reallocate those funds to conservation efforts worldwide.”

A wall mounted monitoring screen has been installed in the lobby of the company offices that displays the array’s daily generation. This allows employees and visitors to track the daily and accumulated environmental benefits. Orvis prides itself on its commitment to conservation and sustainability, and each year commits 5% of the company’s pre-tax profits to protecting nature.