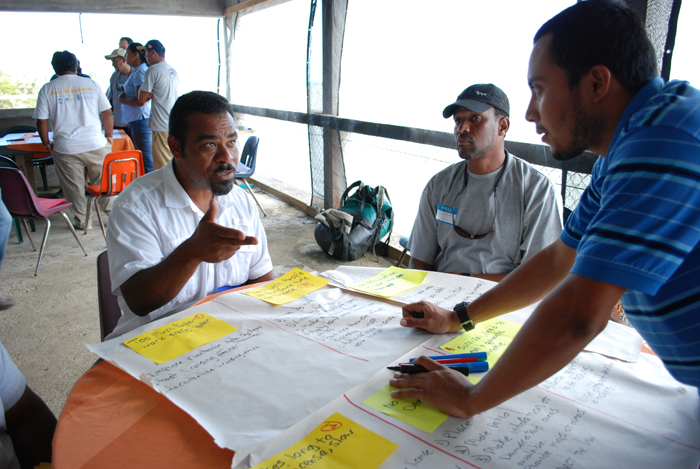 The word has spread all around Belize and fishers have heard about an invitation to attend a series of workshops designed to find out, based on fishers’ perspectives, how the implementation of the Managed Access (MA) program can be accelerated. MA is a fisheries management model that the Government of Belize already successfully implemented in two pilot sites and now is seeking to strengthen and expand on a national level, in eight more marine reserves along the Belize Barrier Reef. This model is relatively simple to understand: it provides artisanal fishers territorial fishing rights, granting them exclusive access to fishing grounds they have used for generations, but which were recently circumscribed inside the limits of marine reserves that started to be declared in the mid-1990s. With empowerment of fishers, strong involvement of local stakeholders in fisheries management, and effective self-enforcement of fisheries regulations by local fishing communities, rights-based approaches to fisheries conservation and management, such as Managed Access in Belize, have proved to be more efficient than conventional top-down mandated preservation.

The Belize Fisheries Department (BFD), the Toledo Institute for Development and Environment (TIDE), Wildlife Conservation Society (WCS), and Environmental Defense Fund (EDF) engaged in 2009 in the implementation of the Managed Access model in two pilot marine reserves: Port Honduras and Glovers Reef. More recently, the BFD and EDF engaged with Rare to make use of Rare´s grassroots methodology known as “Pride Campaign”. This should support the expansion of the Managed Access model from the two pilot sites to the other eight marine reserves by December 2015. Through the lens of social marketing, the Pride campaign approach to fisheries management and conservation in Belize has supported a better understanding of fishers’ needs and motivations that are vital for appreciating and adopting the Managed Access model at a national level. 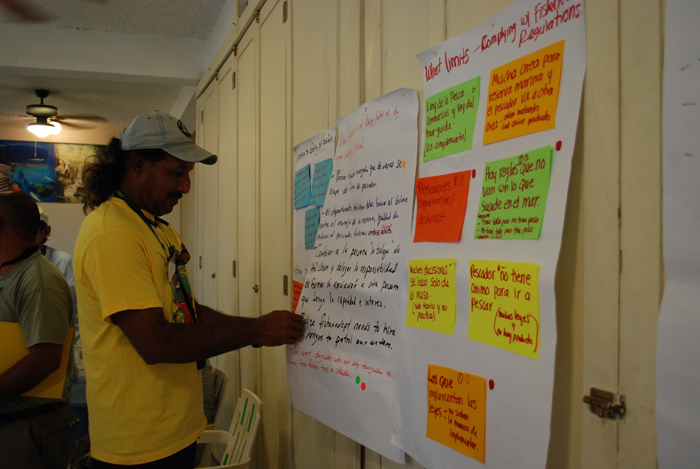 “I grew up with fishing & now I can see that there is fish to fish as before. We don’t want to have no fish to fish in Belize. We need patrolling because there are fishers that don’t respect”. Belizean Fisher

“I really like what is happening. You know… I don’t like to be told what to do, but if like today you come with me and take my opinion, then we can work together. It is the first time that we are being listened”. Belizean Fisher

At their arrival, fishers stated that their attendance was driven by their interest in finding out what are the available alternatives to the ongoing fisheries management mechanisms in Belize. They recognized their fishing catch was declining and that it was necessary to do something to improve production of the nation’s fisheries. Fishers showed a positive attitude and genuine participation, shared their concerns about their current situation and openly contributed with ideas to solve the problems around: License Application, Participation in MA Events, Fishers Organization, Record & Report Catch Data, Comply with Fisheries Regulations, Exclusive Fishing Rights and Best Fisheries Business Practices.

Based on the diffusion of innovation theory and social marketing tools, this kind of workshops are common practice in the private sector to define marketing strategies and adapted to lead audiences to social behavior change, like the adoption of Managed Access by Belizean fishers in this case. These techniques include audience segmentation and research, similar to the efforts that computer or car companies do for understanding what their customers’ needs or desires are. As such, Managed Access fellows are focusing on identifying motivations, attitudes and potential incentives that could help fishers accelerate their behavior change towards sustainable fishing practices and adopt the Managed Access model across Belize.

The results of these workshops, as well as other research techniques, are initially being used as critical input to inform the design of a technical assistance strategy, produce highly targeted messages for the campaigns and define barrier removal incentives. Campaigns will be launched along the Belizean territory using multiple media outlets and community outreach vehicles, such as radio shows, public festivals, puppet shows, billboards, parades and technical assistance activities for fishers. These latter will promote the adoption of the Managed Access model developed by the Government of Belize, facilitate relationship and trust building, and enhance stakeholder collaboration, particularly between fishers and the local government. This national initiative is advancing fisheries management and conservation in Belize, the Mesoamerican Reef, and rest of the Caribbean.