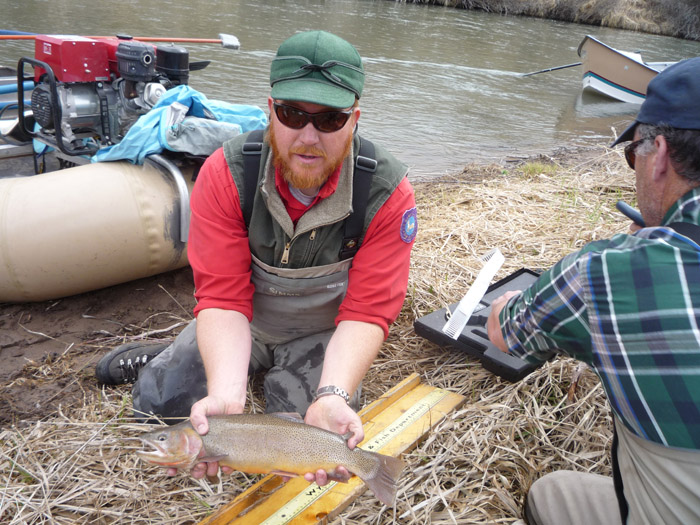 Everyone who has been around irrigation water for very long knows that fish sometimes end up in canals and ditches. But how many fish end up there, what becomes of them, and how it affects the fish population are much more difficult questions, and answers vary widely between canals. Trout Unlimited, Wyoming Game and Fish Department, and the East Side Canal Company—with generous support from the Orvis Company–attempted to answer some of those questions for the East Side Canal this past summer.

What we found was both surprising and reassuring in our efforts to keep the Salt River healthy while ensuring reliable water delivery to local irrigators.

The East Side Canal diverts water from the Salt River upstream from Thayne near the Diversion/Murray access area. At the end of the irrigation season, trout can typically be seen in the East Side Canal just downstream from the headgate. While it is easy to collect and count these fish, there may be others that have gone farther down the canal that are less easily counted. We wanted to know how many trout get trapped in the canal and whether the loss of those fish was a large enough problem that fish loss in the canal needed to be addressed.

During April and July 2012, crews collected and tagged trout in the vicinity of the East Side Canal diversion. Tag scanning equipment was installed in the canal to detect tagged fish entering and leaving it. Additionally, in November, crews collected trapped fish just downstream from the canal headgates. This study showed that some fish (13 of our tagged fish) enter the canal and are lost, but about a third of those that enter the canal find their way back out. Around 300-500 fish end up trapped downstream from the headgates after they have been shut in the fall.

Because fish loss in the canal is small relative to the fish population in the river, it seems that fish screens at the headgate are not necessary. However, installation of a fish return pipe, between the headgates and Strawberry Creek, that can be opened at the end of the irrigation season and allow fish that are trapped below the headgate to exit back to the river would be cheap and effective.
Some fish tags (16) from our study ended up on the pelican nesting island in the Blackfoot Reservoir. This is not surprising to some Star Valley residents who have seen pelican numbers along the Salt River increase over the past several years.

Idaho Fish and Game is trying to reduce nesting pelican numbers to 700 birds, 23 percent of their abundance during 2012. They have implemented a series of management actions and some progress has been made, but the nesting pelican populations still remains above target levels.
So what did we learn with our study? Several things:

Fewer fish end up trapped in the canal than would be suspected based on the number of fish immediately downstream from the headgates.

Many of the fish that do get trapped in the canal can be routed back to the river through a relatively cheap bypass. In 2012, 300-500 fish could have been saved by this method.

Pelicans had a higher impact on fish in the study area than did the canal.

While pelicans are eating some fish and some fish are dying in the canals, overall fish populations in the Salt River have remained high and stable.

That’s good news for sportsmen, irrigators and local business and communities that depend on Salt River water and fisheries.

Jim Gregory is a fisheries biologist who works for Trout Unlimited.