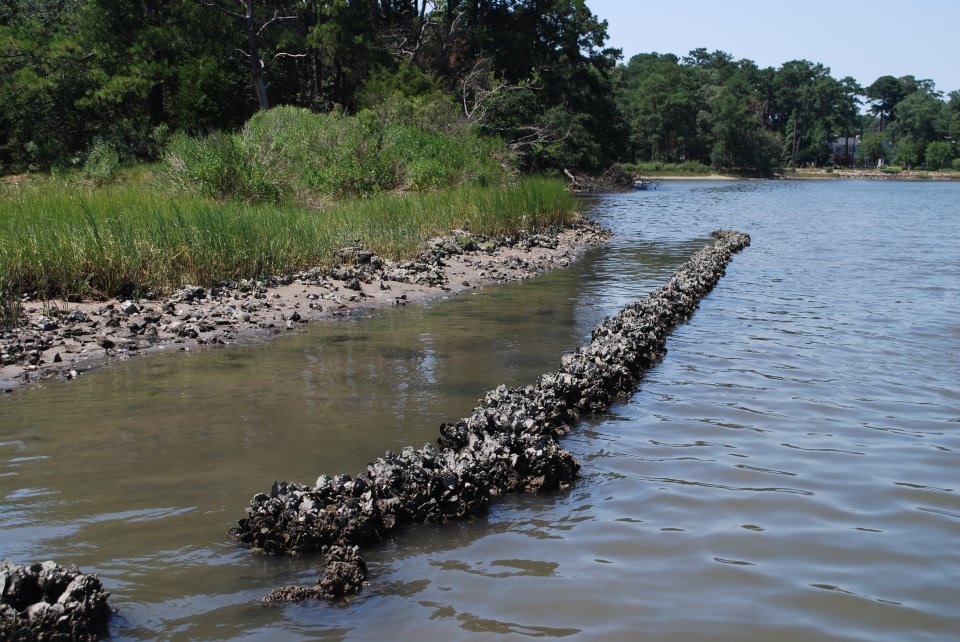 Recent low lunar tides along the Lafayette River offered an excellent opportunity to see the fruits of our oyster restoration work. Above, reef balls planted two years ago are now completely covered in oysters.
Photo by CBF Staff

Once so chock-full that Native Americans called it “great shellfish bay,” the Chesapeake has long since seen its oyster population decimated by overharvesting, pollution, and disease.

This is bad news for the Bay, and its rivers and streams. CBF’s Oyster Restoration and Fisheries Scientist Tommy Leggett explains, “Oysters are important to cleaning up the Bay. They filter huge amounts of water; nearly 50 gallons a day during the warmer months, and they grow in reefs that are home to many other Bay critters”—including blue crabs, striped bass, redfish, black drum, bluefish, white perch, speckled trout, and spot.

But, with support from friends like The Orvis Company, CBF is working to bring this vital species back from the brink.

Every year, with the help of thousands of volunteers, CBF plants tens of millions of baby oysters, builds and submerges hundreds of oyster reef balls onto protected sanctuary reefs in the waters of both Maryland and Virginia, collects oyster shells that are recycled into oyster reefs, works with local watermen on oyster aquaculture, and, runs a successful oyster gardener program.

Working with partners like the National Oceanic and Atmospheric Administration, The Nature Conservancy, and the U.S. Army Corps of Engineers, CBF is focusing its oyster restoration efforts on specific tributaries—Harris Creek, Severn River, and the Choptank and Little Choptank Rivers in Maryland, and the Lafayette, Elizabeth, and Piankatank Rivers in Virginia.

CBF knows we’re not going to save the Bay without oysters. With the help of partners like The Orvis Company, we’re restoring hope, not just for the Bay’s native oyster population, but for the health of the Chesapeake Bay and its rivers and streams.

One thought on “Saving the Chesapeake Bay, One Oyster at a Time”