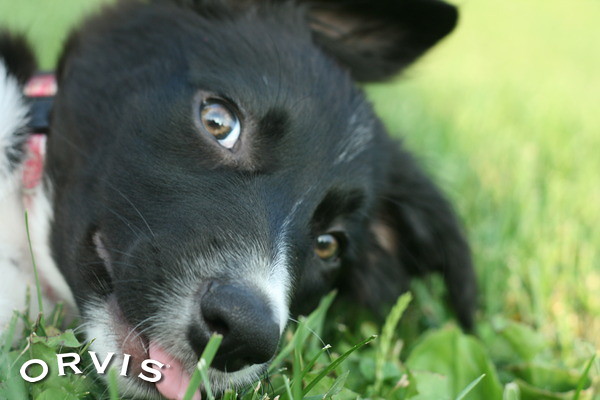 Admit it. Sometimes your dog behaves a little weird.

Of all the spots in the house to take a seat, your furry best friend chooses your foot. She raids your dirty laundry and deposits her treasure around the house. She drinks water from the toilet rather than her water bowl.

Almost all of the strange, funny, absolutely gross behaviors your dog exhibits have logical explanations. In most instances, she’s simply displaying her ancient canine roots and instincts. As much as you know your dog, you and she are a different species, and sometimes she makes that abundantly clear with her offbeat ways.

Here are our top 10 weird dog behaviors—and what they mean.

Does your dog stare at you soulfully while you’re getting dressed for the day, puttering around the kitchen prepping dinner, or watching TV? It’s downright unsettling!

Your dog isn’t trying to creep you out. She’s just gathering information and staying at the ready for affection, treats, and fun. If she doesn’t watch you while you watch TV or make dinner, she could miss out on a walk, a dropped delicious morsel, or those sweet behind-the-ear scratches.

Another possibility—particularly when she’s relieving herself—is watching for signs of danger. This is a vulnerable activity that occurs away from the safety of her den, so she depends on you to watch her back. If trouble’s afoot, she knows you’ll sound the alarm and keep her safe.

This isn’t a universal doggy trait, but some dogs and specific dog breeds won’t let you out of their sight. Known as ‘velcro dogs,’ this type of needy canine follows you from room to room and even protests when you close the bathroom door with them on the outside.

This behavior is often a conditioned response—i.e., your dog associates you with the treats, the “good girls,” the pats on the head, and the wonderful belly rubs. She knows who doles out the finer things in life. It is also more common in some dog breeds, such as Cavalier King Charles Spaniels and Italian Greyhounds, and can be a sign of separation anxiety in dogs.

Tissue paper. Grass. Poop. It’s not uncommon for dogs to snack on odd treats. This behavior falls under the category of pica—eating things that aren’t food. With tissue paper and poop (coprophagia), the behavior often results from boredom or anxiety, or may even be an attention-seeking behavior.

It’s unknown why many dogs munch on grass, but theories abound. If your dog eats grass frequently, she may be meeting nutritional needs, adding fiber to her diet, or simply enjoy the flavor and texture the way you enjoy the cool crunch of a salad.

Your dog looks up at you and looks away, then looks at you again and looks away. Your best friend is acting like she got caught with her paw in the dog treat jar. But guilt isn’t the right word for this expression. Chances are your dog’s reaction is fear prompted by your negative response to her behavior now, or to your frustrated responses in the past. If you reprimand your dog for chewing couch pillows and she does it again, she’s going to be anxious—and give you those guilty eyes as she awaits your response. It doesn’t mean she understands that what she’s done is wrong, but rather that she associates shredded couch pillows and your presence with an adverse reaction.

5. Turns tail during storms or fireworks.

When thunder rumbles or fireworks crack, does your dog whimper, tremble, disappear into the basement and hide, or claw at doors as if trying to escape? As many as 40 percent of dogs suffer from noise anxiety, according to a 2008 report in the journal Veterinary Clinics of North America: Small Animal Practice.

Before dogs were invited to live in homes with their people, they lived outside and had to take precautions to protect themselves from bad weather. They would feel the drop in barometric pressure that precedes a storm and instinctively seek protection from the dangerous winds, rain, and lightning strikes that can come with a tempest. Today, many dogs have the same reaction to an approaching storm, as well as fireworks and other loud noises that sound like thunder.

If your dog reacts to storms, she may benefit from shirts and jackets that hug your dog tight and provide a sense of security. Try crate training your dog so she has a safe den to retreat to during storms, and cover the dog crate to block the lightning flashes. You can also try distracting her with dog treats or a favorite game as the storm approaches. In severe cases, your veterinarian may prescribe anti-anxiety medication.

It’s cute as heck. Your dog walks up to you and settles down on your foot. Or she lies down and falls asleep on your feet while you binge-watch your favorite shows. Why is she doing this? Is she asking for some head pats by getting as close to you as possible? Pretty much. When you’re standing (and you’ve trained your dog to stop jumping) your feet are as near as she can get to you. When she lays on your feet, she’s just choosing a spot for her snooze that gives her a sense of security when she’s vulnerable.

Arguably one of the cutest dog positions, sploots are when a dog stretches her rear legs out behind her when she’s laying down. The term ‘splooting’ originated on the internet, and the pose is most often associated with Corgis—though they aren’t the only dogs to strike the adorable pose. Why does your dog sploot? Chances are she sploots because the position is comfortable and relaxing—think of your favorite position in bed or a satisfying stretch. If it’s a hot day, she also may sploot to get more of her body against the cool floor.

Licking your face incessantly. Sniffing other dogs butts. Getting amorous with other dogs or a visitor’s knee. Dogs can get a little too close for comfort sometimes. These issues all come down to instinct.

Licking is a sign of affection in dogs. When your dog licks your face, she’s licking one of her favorite pack members.

Sniffing other dogs under the tail is how your says “howdy!” and gets to know the signature scents of other dogs.

When she’s overly familiar with a nearby knee, it’s simply an instinct that’s somewhat more common in dogs that are not spayed or neutered, but still often a leftover habit in spayed and neutered dogs. Sometimes, this common behavior is simply an expression of playfulness and excessive energy.

9. Runs in terror from (or valiantly attacks) the vacuum.

This one’s straightforward—that vacuum is loud and invading your dog’s peace and personal space. Bold dogs will attack that intrusive vacuum, while more timid dogs will run away in fear. With awareness and planning, you can prevent your dog from developing a reactivity to vacuums. Spend time calming or quietly playing with your puppy before someone else in the household begins vacuuming in another room. Give her a treat if she remains settled. Let your dog investigate the vacuum if she wants to, and gradually move the vacuum closer.

From a collection of toys in her dog crate to a stash of your underwear under the couch, some dogs are hoarders. No matter what your dog is hoarding, it comes down to instinct. In the case of dog toys and bones for gnawing, your dog is hiding the good stuff for later. If she leaves it out in the open, another dog may come and take it away! When it comes to your laundry, she collects your t-shirts, socks, and underwear because they smell like you and comfort her to have nearby. She also likely enjoys chewing on them. The reason she hides these items is that she learned you’ll pick the clothes up and throw them right back in the laundry if she doesn’t.

This is a habit to watch closely because when she chews on objects not rugged enough to withstand her tough jaws and sharp teeth, she may swallow objects that can block her digestive track.

That’s our list of strange dog behavior. Does your best friend’s mystery behavior take a different turn? We’d love to hear about the weird shenanigans your furry oddball gets up to in the comments below!