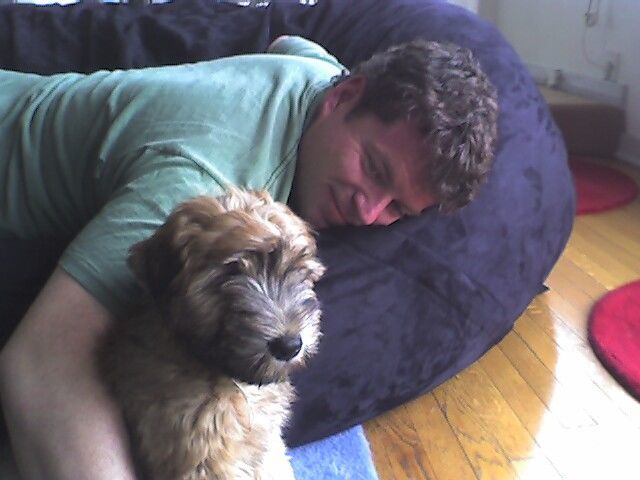 Dave Holmes bonds with Junior on their first day together.
Photo via esquire.com

I’ll be honest: I never heard of Dave Holmes before today, although the actor, comedian, and former MTV veejay seems to have a lot of fans. He has one more now, after he penned a beautiful story on Esquire.com about his life with a beautiful Wheaten Terrier named Junior, who recently passed away. Holmes starts at the beginning, when he and his partner first decided to get a dog, and takes us through the whole process of finding, choosing, and living with Junior. For Holmes, it was a real process of discovery:

A dog introduces you to a simple, honest, new kind of love. Or maybe an old one: the one you felt when you were a kid and the world was full of wonder and affection and possibility and you only knew a couple of people and they were your everything. A year or so into having him, I was doing some writing in my office, and I looked down and he was there at my side, looking up at me. What does he want? I thought. I’ve fed him, we’ve walked, we’ve wrestled. What is it, Junior? And then it hit me: he just wants to be near me, because we’re friends.

And the, of course, their is the end of the story. It’s sad, but Holmes deals with it gracefully and philosophically. It’s a bittersweet reminder of what makes a life with a dog so special.