The word osteosarcoma is all too familiar in greyhound circles, where pet parents mourn the loss of thousands of beloved dogs each year. But there is hope in the fight against this deadly disease: The ongoing innovative research that will lead to new treatments and, ultimately, a cure.

It has long been known that some breeds have a predisposition to develop certain cancers—such as osteosarcoma in greyhounds, golden retrievers and great danes.

One promising study tests rapamycin, a drug used with human cancer patients, in treating dogs with osteosarcoma. This bone cancer clinical trial is shepherded by the Comparative Oncology Program at the National Cancer Institute’s (NCI) Center for Cancer Research.

“Rapamycin is a generic drug, so it’s available already, and it could be relatively inexpensive,” says Dr. Chand Khanna, director of NCI’s Comparative Oncology Program and the lead researcher on the study. “If it works, it would be a simple way for pet owners to improve treatment of their dogs at lower cost.”

Dr. Khanna cautions that even if the trials are successful, it may take years before rapamycin becomes a standard therapy. Still, he has seen a lot of enthusiasm for this study and says it “proves that people with common and overlapping interests can do a lot more together than they could by themselves.”

Dr. Tim Fan, lead researcher on the University of Illinois team, who has conducted extensive work on managing pain in bone cancer patients, recently evaluated the use of a drug called pamidronate to decrease pain and increase quality of life for canine osteosarcoma patients. Many of his patients were greyhounds and Rottweilers.

His research—funded by the Foundation—shows that the drug interferes with the tumor’s ability to break down bone cells and may stop the bone destruction that occurs from bone cancer. Dr. Fan and his team also developed a novel approach for assessing pain, which uses computerized gait analysis to objectively measure the degree of lameness.

These discoveries are not only promising but, some say, long overdue.

“We want to find new treatments for osteosarcoma, and we can’t do that without pet owners who are willing to help us investigate this disease process,” says Dr. Fan.

“With these clinical trials, we can investigate and provide cutting-edge therapy that patients may not get otherwise,” he adds. “Foundation-funded studies serve as a wonderful avenue for pet owners to pursue conventional therapies and for researchers to evaluate novel therapies at the same time.”

To learn more about the Foundation’s Canine Cancer Campaign, go to www.curecaninecancer.org

This year more than 57 million salmon returned to Bristol Bay — yet the proposed Pebble Mine plans put this massive ecosystem at risk. @lisamurkowski @realdonaldtrump @sendansullivan tell the @EPA to #VetoPebbleMine. Please RT or comment! 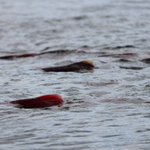