Last year, we posted a few times about Baltimore police officer Dan Waskiewicz, who responded to a call about a vicious Pit Bull, and instead ended up adopting the dog, who he called Bo. Here’s another great story of a public servant going out of her way to ensure the safety of a dog.

When commuters in Boston reported two dogs trapped inside a fenced-in area of train tracks, Officer Lisa Murawski-Dupont hopped on her bicycle and went looking for the dogs.

As she neared the station, a break in the fence allowed her access to the tracks. It was 10 a.m., and she was able to catch a glimpse of one of the dogs.

“I saw a large pit bull shaking and wet,” Murawski-Dupont said during a telephone interview.

She crawled to reach the stranded dog, hoping he was friendly. “He had a look of absolute relief on his face,” said Murawski-Dupont. 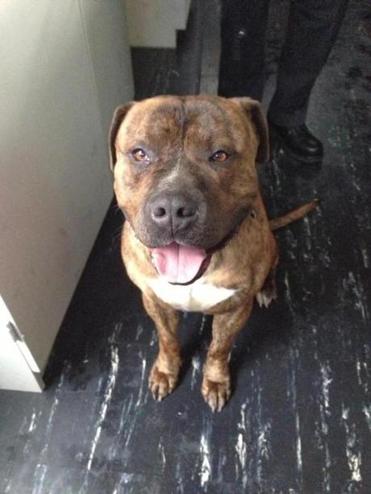 The dog, now named Rudolph, was spotted by MBTA passengers.
Photo via bostonglobe.com