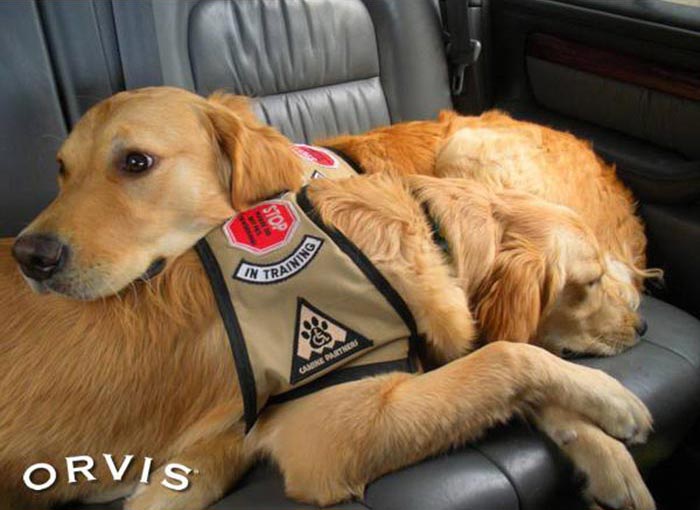 So-called “service animals” seem to be proliferating these days. Though the majority of them are dogs, other animals have been appearing in service roles, as well. You see them in all sorts of public places including airports, train stations, supermarkets and restaurants, where pets are not normally allowed. How do you qualify to get one of these dogs?

First, to eliminate further confusion about an already-confusing topic, we should clarify the correct terminology for describing these animals:

The term service dog is accurately applied only to dogs that have been trained to provide a specific service to people who suffer from a disability as defined by the American with Disabilities Act (ADA) of 1990. Service dogs are legally allowed anywhere the public is.

There is a wide range of disabilities that may warrant a service dog. The most familiar examples ares a blind person’s need for a seeing-eye dog and a deaf person’s need for a hearing dog. There are also psychiatric service dogs that have been trained to detect and stave off mental health crises by performing specific actions for afflicted individuals. For example, upon recognizing the onset of a psychotic episode, say, for someone suffering from PTSD, this type of service dog might remind its handler to take medication.

Legally, a service dog doesn’t require any type of identification or certification, and you can’t ask its handler about his disability, even if it’s not obvious. However, you can ask what service the dog has been trained to perform. Any breed can be trained as a service dog.

There are many specialized organizations throughout the country, many of them nonprofit, that source and train Service Dogs and endeavor to match them to an appropriate disabled handler (who will also receive training upon being matched with a dog). Depending on the organization, these dogs may be available free of charge even though it costs over $50,000 to breed, raise, train and place each one. Unfortunately, there can be long waiting lists for these dogs since they’re in such demand.

An emotional support animal (ESA) can be almost any kind of animal that has been prescribed by a health professional as part of a medical treatment plan to support someone suffering from emotional or mental distress. An ESA doesn’t have to perform a specific action to mitigate its handler’s disability; rather its mere presence provides comfort.

To legally qualify for an ESA you must be diagnosed and certified by a health professional as having a severe emotional or mental disabling condition as defined in the latest Diagnostic and Statistical Manual of Mental Disorders (DSM-5) This allows you to have the animal accompany you only in specific places, as follows:

Currently, ESAs enjoy no other legal protection allowing them access to other venues. This leaves the owners and managers of other establishments frequented by the public, which don’t normally allow pets, such as retail stores and restaurants, in the unenviable position of gatekeeper.

ESAs don’t require any kind of identification, though airline officials and landlords have the legal right to ask their handlers to provide a letter from their doctor certifying their need for the animal to mitigate their disability.

Since they don’t necessarily require specialized training, ESAs can be sourced the same way as regular pets which makes them readily available. Their relative intelligence, sensitivity and trainability make dogs well-suited to be an ESA. However, their temperament, socialization and knowledge of basic commands are all of paramount importance to the role they will be asked to fill so it’s important to find the right dog and train him properly. This may be a job best left to the experts. Similar to service dogs, there are many organizations devoted to developing ESAs, particularly for veterans of war.

Service dogs and ESAs perform a crucial function for their disabled handlers, improving their quality of life and allowing them to go about their daily routine without always having to depend on other people to help. While you might think it would be nice to have your beloved pet accompany you everywhere, just consider the situation of those suffering from disabilities who have no choice.

For more information on service dogs, take a look at our Service Dog Infographic , which compares different types of animal aid.