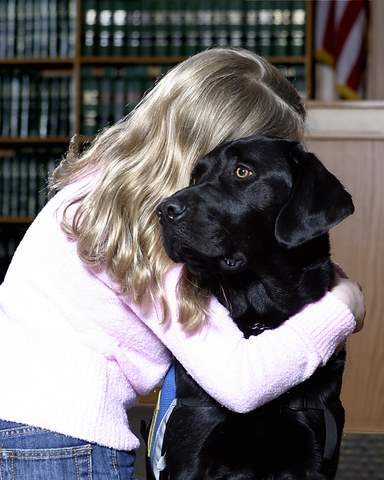 After seven years, the first courtroom dog in Snohomish County, Washington is retiring. Stilson, a 9-year-old black Labrador, pioneered the courthouse’s first puppy presence in 2006 and has comforted hundreds of child abuse victims during testimonies since. In his time with the judicial system, Stilson won over the hearts of children, witnesses and prosecutors alike. The Seattle Times covered the story.

“I love that dog. I love what he has done for kids and victims. He helps them face what they have to face in the criminal justice system,” said Snohomish County deputy prosecutor Lisa Paul. ‘He was like a life ring.”

But for Stilson and Snohomish County, it was almost a partnership that never happened. Heidi Potter, Stilson’s owner and handler originally intended the pup to become a service dog for the physically disabled. It was quickly determined Stilson was too friendly for the position. The social butterfly was a perfect fit for the courtroom however, and as he heads off to enjoy the beaches and sunsets of California his legacy will remain in Snohomish.

“He’s had hundreds of kids crying on him and climbing on him,’ Potter said… ‘He deserves to just be a dog for the last few years of his life.”