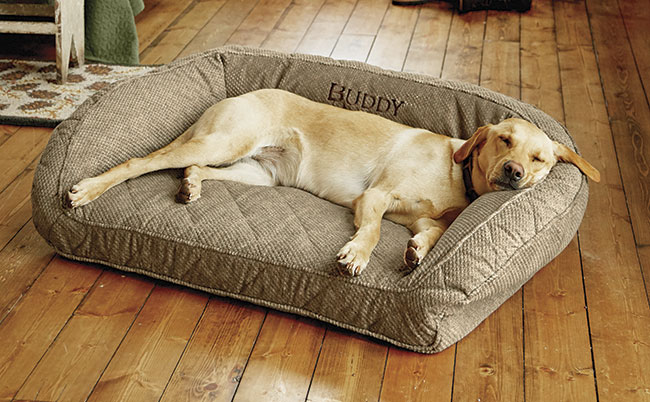 Adult dogs spend 12 to 14 hours asleep each day. Parts of the canine sleep pattern resemble our own sleep cycle—including REM sleep. When your dog’s eyelids begin to twitch and her paws start to move, you may be wondering what’s going on during her slumber. Do dogs dream? The answer is: most likely.

How Do We Know That Dogs Dream?

Our furry companions can’t tell us about their dreams, but scientists have been able to figure out what is going on while their eyes are closed. Electrical patterns observed in the brains of sleeping rats matched patterns that were previously recorded while the rodents learned a maze. The patterns were clear enough that researchers could determine the part of the maze the rats were dreaming about. Other studies yielded similar results—neurons firing during sleep matched those recorded during the animal’s wakeful hours. This suggests that animals have dreamlike periods during their REM sleep cycle, just as humans do.

What Do Dogs Dream About?

Though we cannot know for sure, our pets likely dream about the things they do during the day. Considering the sleep of a dog—and her dreams, specifically—is nothing new. Aristotle wrote of animals’ penchant for sleep and their ability to dream. In addition to studies, anecdotes from pet owners about animals waking suddenly and engaging in odd behaviors have given researchers clues. One man’s story about his bath-averse dog waking suddenly and hiding between his legs—a behavior observed only after bath time—led him to believe the dog was dreaming about the dreaded activity.

In another study, rodents were introduced to a maze, able to see—but not reach—the food at the end. They seemed to dream about the route, as evidenced by the same neurons firing both during sleep and while they were loose in the maze.

Dreaming is not a mammals-only activity. Zebra finches rely on dreams to memorize songs. They practice their complex melodies during the day, guided by adult birds. Then, they dream the same tune after they fall asleep. Researchers compared the electrical activity within the brain both while the finches were learning songs, and while they were sleeping—and the patterns matched. While dreaming, the birds’ neurons fired in the same order as if they were singing parts of the song.

Based on research across species—dogs, cats, birds, mice, and even fruit flies—it’s safe to say your best friend is dreaming about his favorite treats, perfecting his sit-stay, and taking to the field with his favorite person.

Should You Wake a Dog During a Nightmare?

If your dog has a nightmare, it is safest to leave him alone. If woken during a scary dream, the dog may not be fully aware and may lash out. If you choose to wake him, avoid getting too close or using your hands—even the friendliest of dogs could bite in this situation. Speak gently to rouse him, and let him get his bearings after he wakes. If nightmares are common, a veterinarian may make recommendations for easing your dog’s anxiety.

Why Do Dogs Twitch While They Sleep?

Deep breathing and stillness indicate your dog is likely in the Slow Wave Sleep (SWS) phase, which lasts for around ten minutes. Dogs and other animals may twitch, whine, show an increase in movement, or breathe irregularly when they reach the Rapid Eye Movement (REM) phase. As in humans, this is when dream activity occurs. The pons—an area of the brain that shuts down major muscle groups within the body during sleep—prevents your companion from getting up and acting out dreams while snoozing. When researchers shut off the pons in one study, the dogs involved began to move around as if they were awake, though recorded brain waves indicated they were within the REM phase.

While some dogs may exhibit strange behaviors in their sleep, they do not sleepwalk as is observed in humans. Minor twitching and movement is normal, but more intense activity may be related to a neurological condition, seizure disorder, or other sleep disturbance. If it appears that your dog is walking or thrashing about in his sleep, consult your veterinarian.

Do Dogs Sleep With Their Eyes Open?

Dogs may appear to sleep with their eyes open. The appearance of being awake while dozing is a holdover from wild canine ancestors, meant to deter predators looking to sneak up on sleeping dogs. A third eyelid—the transparent membrane that rises over the eye—offers protection from debris or over-drying while sleeping.

While we may never know exactly what our dogs dream about, they spend plenty of time doing it. A dog spends more than half her day sleeping, and 10 percent of that time in the REM phase, when dreaming happens. Like humans, dogs need their sleep, so provide yours a comfortable dog bed and let her dream. Whether processing information, committing good manners to memory, or flushing ducks in their sleep, our dogs enthrall us with their every nose wiggle and paw flick.

4 thoughts on “Do Dogs Dream?”