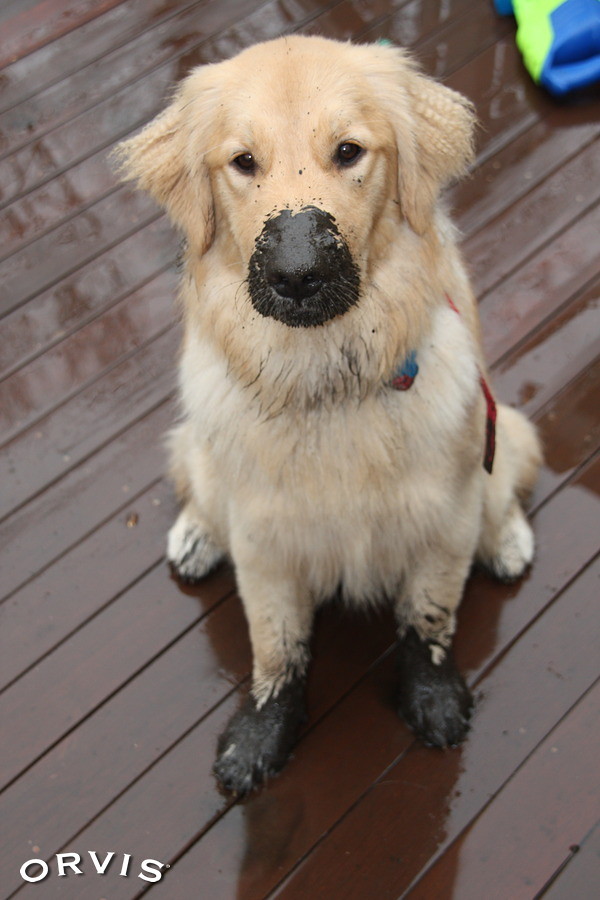 No, I wasn’t digging in the yard. Why do you ask?
Photo by Mary Beth, Sherborn

There are few dog behaviors more frustrating than continual destructive digging in your beautiful yard, turning it into a pockmarked mess. What makes it particularly maddening is its seemingly random nature: often it is not immediately clear why your dog is digging these holes. And his demonic, single-minded persistence in digging, despite your repeated exhortations to stop, makes you wonder whether there’s something wrong with him. Rest assured, there is hope. He can be trained to kick his compulsive digging habit or at least confine his digging to an approved area. As is the case with any canine training exercise, the process requires patience, perseverance, and a healthy dose of Pavlovian conditioning.

First, it’s important to understand why your dog is driven to dig. The causes are varied but the one behind habitual, compulsive digging usually relates to insufficient mental stimulation and physical exercise—the reason for many unwanted canine behaviors. And it’s instinctive. When dogs evolved from wolves, humans welcomed them into their communities because they performed valuable services including protection from predators and enemies, support with hunting, eradication of vermin, and eventually, help with chores and livestock. Ultimately, dogs breeds were developed for additional purposes, resulting in the huge number and varieties we have today. But, dogs’ working origins remain in their genes and can manifest in modern daily living—often in unexpected ways, such as digging.

We all know dogs need the basics—food, water, human companionship, and a safe place to sleep. But experienced dog owners will also add adequate physical exercise and a ‘job’—something to give a dog purpose in his life—to the list of canine essentials. Dogs’ behavior can go awry if these needs aren’t met. Digging is just one of many possible symptoms, such as barking, chewing, and jumping, for example.

Dogs Digging with a Purpose

Not all digging can (or should be) discouraged. Sometimes dogs dig shallow holes—more like indentations in the ground—for the innocent purpose of making themselves a cool (or warm), comfortable place to lie down. It’s hard to begrudge them this behavior which is actually a clever way of coping with their environment. One answer is not to leave your dog outside unattended for extended periods of time, especially in the heat or cold.

Other benign digging involves burying a bone, ball, or other favored items he wants to save for later—this is primal behavior you’re not likely to change. You could avoid the issue by not allowing him to carry his valuables outside, but that’s probably not realistic; you’re better off establishing a “safe” digging area (see below) where you can train him to bury his treasures.

Another purpose-driven digging behavior involves trying to relentlessly root out underground vermin, such as mice and voles, which can be a big problem if you live where there are a lot of rodents. Oftentimes, dog owners aren’t aware that’s what their dog is doing and thus don’t deal with the problem effectively. If, say, you have a terrier and he spends a lot of time digging after vermin, something he was bred to do, you’re unlikely to get him to stop; you have to get rid of the source of the vermin first (which can be grubs or other food source in the lawn).

Problematic digging behavior that needs to be nipped in the bud includes digging to escape from a confined space such as your fenced in yard, or habitual destructive digging just for the sake of digging. If it’s the former, you can take measures to ensure the behavior isn’t positively reinforced, allowing him to get loose, by making the fencing impenetrable. Otherwise, digging that has no apparent purpose is a sign your dog has excess mental and/or physical energy that needs to be channeled in a more constructive manner.

How to Stop your Dog from Digging

The easiest and most obvious way to deal with excess energy is by increasing the amount of exercise your dog gets each day. Most healthy dogs needs between 30 and 60 minutes of reasonably vigorous exercise each day. Mixing up the type of exercise will help keep your dog mentally alert. For example, rather than walking the same route every day, go a different way and/or try different terrain. Or, rather than just going for a walk each day, add in a rousing game of frisbee or fetch, maybe including some canine friends, if available. There are plenty of ways to exercise indoors when the weather is bad outside.

In spite of your best efforts otherwise, your dog may persist in digging. After all, some dogs are born to dig, in which case you should establish a safe digging zone sooner rather than later. To create a digging zone, set aside an unobtrusive area of the yard for your dog’s exclusive use. If necessary, add sand to the soil to make it “diggable,” or repurpose an old sandbox. Introduce your dog to the area by burying a few of his favorite toys and leading him to it. When he digs out the toys, praise him and give him a treat. If you catch him digging elsewhere, say “No” in a firm voice and lead him to his safe digging area. Repeat these steps as many times as necessary; most dogs will catch on before too long.

Dogs, like humans, vary enormously in terms of their personality and inbred idiosyncrasies. Though we do our best to socialize them properly and train them to behave, they’re never going to be objectively perfect. Regardless, we learn to love and cherish them, warts and all. Or, rather, holes and all, if they happen to be committed diggers. Flawless, manicured yards are overrated, anyway.