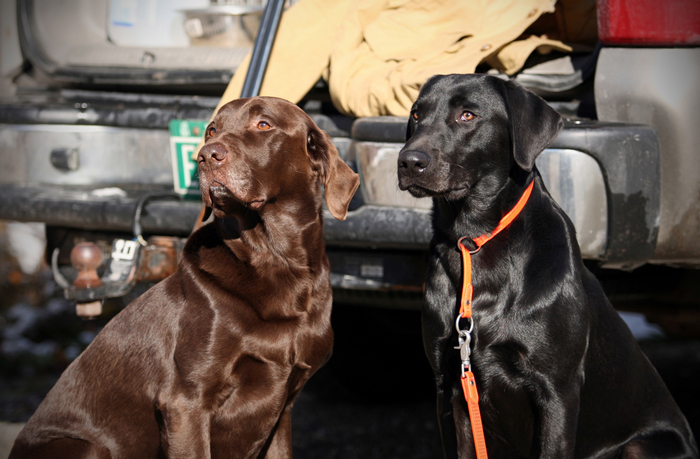 Among the most beloved, ubiquitous, and recognizable dog breeds, the enthusiastic and sociable Labrador Retriever not only makes an excellent pet, but is also an outstanding working dog. Originally bred as a water-retrieving hunting dog, the Lab possesses a combination of intelligence and eagerness to please his humans, making him highly trainable for a wide variety of work. Long pressed into service aiding those with disabilities, the Lab also has an excellent sense of smell, making him invaluable for police and military work.

Where Are Labrador Retrievers From?

If you guessed the obvious—Labrador, Canada—you’re close. Labs actually originated in nearby Newfoundland, the home of their mega-sized ‘cousins’ of the same name. Modern Labs descended from the St. John’s Water Dog, a breed created in the 1500s when small, local water dogs were bred with Newfoundlands. Fishermen used the St. John’s Water Dogs, also known as Lesser Newfoundlands, to jump into the icy water to retrieve fish that had fallen off the fishing hooks, as well as help pull in the fishing nets. The dogs’ thick, oily double coat made them relatively impervious to the cold.

The Earl of Malmesbury imported the breed to Poole, England, in the early 1800s; he had been so impressed watching them in action in their native Newfoundland that he brought them home to serve as bird hunting dogs. He started calling them “Labrador Dogs” and the name stuck. The breed endured and was recognized by the English Kennel Club starting in 1903, and the American Kennel Club in 1917. A few years later, wealthy Americans started importing Labrador Retrievers to the U.S. en masse to join their native Chesapeake Bay Retrievers as hunting dogs.

In a word, no. With an estimated 10% of the U.S. population allergic to dogs, there is a justifiable interest in ‘hypoallergenic’ dog breeds. But the problem is, there is no truly hypoallergenic dog, contrary to popular belief. Since allergy sufferers’ symptoms are triggered by proteins in dogs’ skin and saliva, as well as in their fur, all dogs present a potential problem, including Labs.

However, allergy sufferers seem to tolerate certain breeds better than others, including Poodles and Portuguese Water Dogs, to name a few. Doctors and veterinarians recommend that allergy sufferers looking to adopt a dog try to spend some time with the dog in advance to determine how potentially allergenic he seems.

Are There Different Breeds of Labrador Retrievers?

Among dog aficionados, it is commonly understood that there are two types of Labrador Retrievers: the English Labrador and the American Labrador, though neither the English Kennel Club nor the American Kennel Club differentiates between the two. Officially, on both sides of the Atlantic, there is only one breed standard for the ‘Labrador Retriever,’ though there are differing allowances for size. This makes sense since they are, in fact, generally different in size and in other ways.

English Labs tend to be stockier with wider heads, a fuller face, and shorter muzzle. They also have shorter legs and a thicker coat. American Labs, on the other hand, are more streamlined looking with long legs and a lean, athletic build. They have narrower heads and thinner coats.

In general, because American Labs have long been bred to excel in field trials, they tend to be high-strung, with a high energy level that must be channeled in a constructive way, either through exercise or some sort of “job;” otherwise they can develop behavioral problems. English Labs are calmer, quieter, and easier to manage. Both are very affectionate, with a strong desire to please their owner or handler, which, combined with their intelligence, makes them very trainable.

Do Labrador Retrievers Have Webbed Feet?

Yes, Labs have webbed feet, similar to many other breeds such as Newfoundlands, Chesapeake Bay Retrievers, and Portuguese Water Dogs, to name a few. Their webbed feet help make them excellent swimmers.

Labs were purpose-bred to be excellent hunting dogs—traditionally specializing in flushing out or retrieving waterfowl. In addition to their affinity for water and their extraordinary swimming ability, Labs are focused and indefatigable, never quitting in their pursuit of quarry until they’re commanded to do so.

Though the Labrador Retriever was originally bred to be a highly accomplished specialist in the water and in the field, many of us are familiar with them simply as delightful household canine companions. Oh, and there’s one last aspect of Labs that should be mentioned: they like to eat. A lot. They’re legendary for not only stealing food off the table or countertop, but also for eating plenty of alarmingly inedible objects. An indiscriminate palate is part of a Lab’s charm, after all.