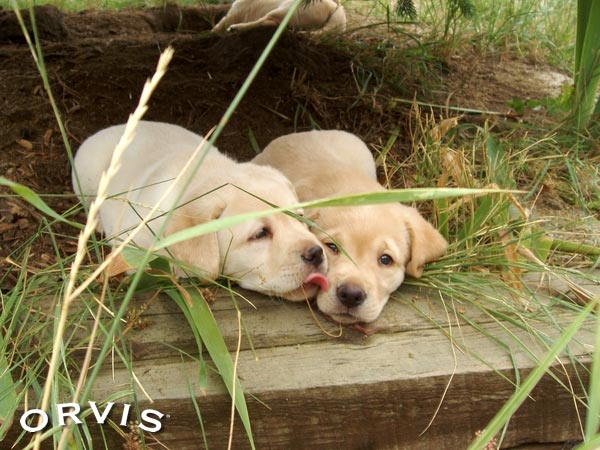 A puppy is a big responsibility, and mistakes you make early can have long-lasting consequences.
Photo by Staci, Northglenn

It is so exciting to bring home a new puppy. What’s not to love about a warm, fluffy, wriggling mass of energy who delights in playing with her humans and exploring her new surroundings in search of trouble? A puppy brings so much life and energy to a household, it’s easy to get carried away, overindulging her exuberant behavior and insatiable desire for attention. While that behavior might be novel and charming now, it won’t be so cute when your puppy becomes an out-of-control adult dog.

You should certainly enjoy your new puppy and her hilarious antics, but must also lay the groundwork to help her develop into a well-adjusted, obedient adult dog. Hopefully, by now you will have read a book or two about how to train a puppy, and have some idea about the structure and discipline she needs. But if you’re like most new puppy owners, you may experience lapses where you don’t follow the advice of experts. Here are some puppy guidelines to help you navigate this challenging but ultimately rewarding new chapter.

Five Tips for People With Puppies

At least, during the first few months. She is likely to have accidents and get into other trouble wandering around the house. Keep her confined to a puppy-proofed room, or crate her for short stretches of time when you can’t pay close attention to her. And when you’re out and about with her, remember never to leave your new puppy—or any dog—alone in the car, even for a short while. It can be dangerous and even deadly, and is illegal in some states. Leave her at home or with a friend instead.

2. Use positive reinforcement instead of punishing your puppy.

Negative attention doesn’t work with puppies—it serves only to confuse them, possibly turning them into fearful and aggressive dogs down the road. Instead, focus on redirecting your puppy immediately when she’s engaged in naughty or destructive behavior, and reward her immediately when she does something right. She will not understand a correction that takes place after the fact. The keys to puppy training success are consistency, patience, and love. And hitting or yelling at your dog, however angry you are about some egregious act of destruction, is only counterproductive. Nor should you use her crate as punishment for a misdeed: while crate training a puppy is an excellent strategy for housebreaking, the crate is meant to be a safe, comfortable space that makes her feel secure. You can train your puppy to sleep in her crate at night or put her in it for naps and quiet time throughout the day. But never relegate her to the crate in anger, and never leave her there for too long.

Tiny puppy teeth, although they’re sharp, ostensibly pose no threat—so allowing your puppy to gnaw on your fingers and toes may seem okay. But however harmless her play biting feels, resist allowing your puppy to do it. Just imagine adult teeth in a powerful, full-grown jaw doing the same thing—the consequences could be disastrous. Make sure you nip in the bud any potential bad habits. Have chew toys available throughout the house to substitute when she gets too mouthy, and use a consistent command, such as “no teeth” or “no bite” to discourage it. If you’re consistent, she will figure it out.

Likewise, avoid games or activities that encourage your new puppy to become possessive—a thing known as ‘guarding behavior.’ Tug-o-war, for example, a game that most puppies love, can lead to problems if not handled appropriately. Humans should always be the ones to initiate this game and it should be played on their terms, not the puppy’s. Train your puppy to let go on command and reward her promptly when she obeys. The same goes for dog games that involve retrieving an object such as a ball or Frisbee.

4. Take a gentle approach to exercising with your new puppy.

Though it may seem counter-intuitive, too much strenuous exercise is hard on a puppy’s developing body and can cause long-term damage. It’s best to wait until she is full grown to take her running with you—running too soon with your puppy makes her susceptible to bone and joint damage. The very earliest you should try—assuming she is healthy—is eight months, but even this is too early for a large or giant breed puppy. During her early life, focus more on getting your new puppy used to the people and noises around her, and limit her exercise to grassy or other soft surfaces. Once you begin an exercise regimen with her, acclimate her to it gradually, as you would your own workouts, so she’ll have time to adjust. Ask your vet to help you assess when your puppy is ready for exercise.

5. Keep your puppy away from strange dogs until she is fully vaccinated.

Your puppy will need a series of vaccinations to prevent common dog diseases—try not to expose her to strange dogs until the series is complete. But while some veterinarians recommend keeping a puppy in isolation, this ‘quarantining’ of a new puppy must be balanced with the important socialization that occurs within a sensitive window during a puppy’s early life. Early euthanasia is a reality for a shocking number of dogs whose bad behavior earned them a death sentence. While environmental hazards can threaten the health and well being of your puppy, a lack of socialization can be lethal, too. Talk to your veterinarian about the best way to find this balance and still keep your puppy healthy.

1. How much should I feed my new puppy?

Some veterinarians maintain that the quantity suggested on the side of the food bag is already about a third more than your puppy needs. But precisely how much you feed her depends on a multitude of variables, including the nutrient content and digestibility of her puppy food, to say nothing of her size. Small breed puppies may require more frequent feedings and a smaller kibble size than large breed puppies. Take care not to overfeed, even if your puppy is a large or giant breed: it’s natural to assume you should feed her plenty of food to encourage healthy growth and development, but giving her too many calories can contribute to a multitude of health problems. Leftover kibble in the bottom of her bowl is an excellent sign you’re overfeeding her. Consult your veterinarian about the amount of food your new puppy needs, and ask which preparation is best for her. Avoid handing her bits of your food from the dinner table, and avoid letting her ‘graze’ from an overfilled bowl of kibble. Instead, establish a twice- or three-times-daily feeding routine right from the start.

2. When should my puppy have her first vaccinations?

Your puppy should have the first vaccination in a series when she is between six and eight weeks old—it’s potentially life-threatening to wait longer than that. Then she must have the other shots in the series at two- to four-week intervals, at your veterinarian’s discretion, until she is between 12 and 16 weeks old. Honor the schedule your veterinarian has established for your puppy: waiting too long between shots is potentially as life-threatening for her as waiting too long for her first immunization. All puppies need vaccinations for rabies, canine distemper virus, canine adenovirus-2, and canine parvovirus. Your veterinarian can advise you about optional protection against Bordetella (kennel cough), Lyme disease, leptospirosis, canine coronavirus, and others. It’s best to follow your veterinarian’s advice about when to vaccinate your puppy, and which vaccines she needs.

3. How do I discourage my puppy’s destructive chewing habit?

Chewing is a natural behavior for any dog, and especially for a new puppy. But your puppy can’t yet discriminate which things are okay for her to chew, and which are not. The best strategy is to make sure she has plenty of safe, satisfying chew toys, puzzle toys, and other interactive toys. And when your puppy begins to chew something she shouldn’t, use redirection, just as you would for a human toddler: take away the forbidden object and immediately hand her something that’s hers. Teach her the ‘drop it’ or ‘leave it’ command. And pick up your stuff off the floor—leaving things scattered about is an open invitation to your puppy for investigative chewing or outright demolition, until she knows better.

4. When should I start training my new puppy?

Don’t wait: you can start training your puppy to be a good canine citizen the instant she comes home with you. House training will be a top priority of course, but you can also work on the basic commands right away—for example, sit, stay, and down—and begin establishing house rules and setting boundaries. Consistency is key: maybe ‘Down!’ will be your command for your puppy to lie down, or perhaps ‘Lie down!’ or ‘Go lie down!’—but choose only one, always use that one, and get everybody in your house on the same page to use the chosen command so your puppy won’t be confused. Keep your training sessions short and fun; don’t ask too much of your puppy all at once, and make your puppy training reward-based and positive.

5. When should I have my puppy spayed or neutered?

Males should be spayed by six months, before they begin to raise their legs and assert dominance, and females any time after eight weeks, but preferably before the first heat. Some breeders of large and giant breed dogs insist that spaying or neutering before six months increases the odds of bone or ligament problems in these dogs, but there is no science-based evidence to support this claim. That said, anesthesia and temperature regulation during surgery can be difficult for some puppies, and spay surgery can be more complicated in in very large breeds. Consult your veterinarian about the best time to spay or neuter your puppy.

Having a puppy is fun, but what’s even better is watching her develop into a really nice adult dog beloved by everyone who meets her. This doesn’t happen by chance and it doesn’t happen overnight. Your neverending, consistent guidance, care, and love when your dog is young will pay big dividends later. Given how busy modern life can be, little slip-ups in discipline now and again are to be expected and can be forgiven, but understand that your dog is always watching and taking her cues from you. Give her the gift of a routine and firm direction—from the get-go—and enjoy her lifetime of companionship.