Sadie was exhausted on her first night in her new home.
All photos by Dave Hosler

Several weeks ago, my wife, Brandi, took our cat to the vet to get his annual checkup and shots. While at the office, she met a woman who was fostering a Silver Lab named Sadie. Brandi came home talking about a dog that had been rescued from a high-kill shelter and was the sweetest thing she’d seen in a long time. I took that as a dig because I’m pretty sweet. I mean, I’d melt in the rain. But I digress..

I’m usually the sucker for any animal in need. I get it from my mom, who would bring home cats from the steel mills she worked at. She’d tell me stories of rats the size of cats, so she needed to save them from a certain death in a mill. As a kid, you can imagine the dreams I’d have of giant mill rats doing battle with mill cats. 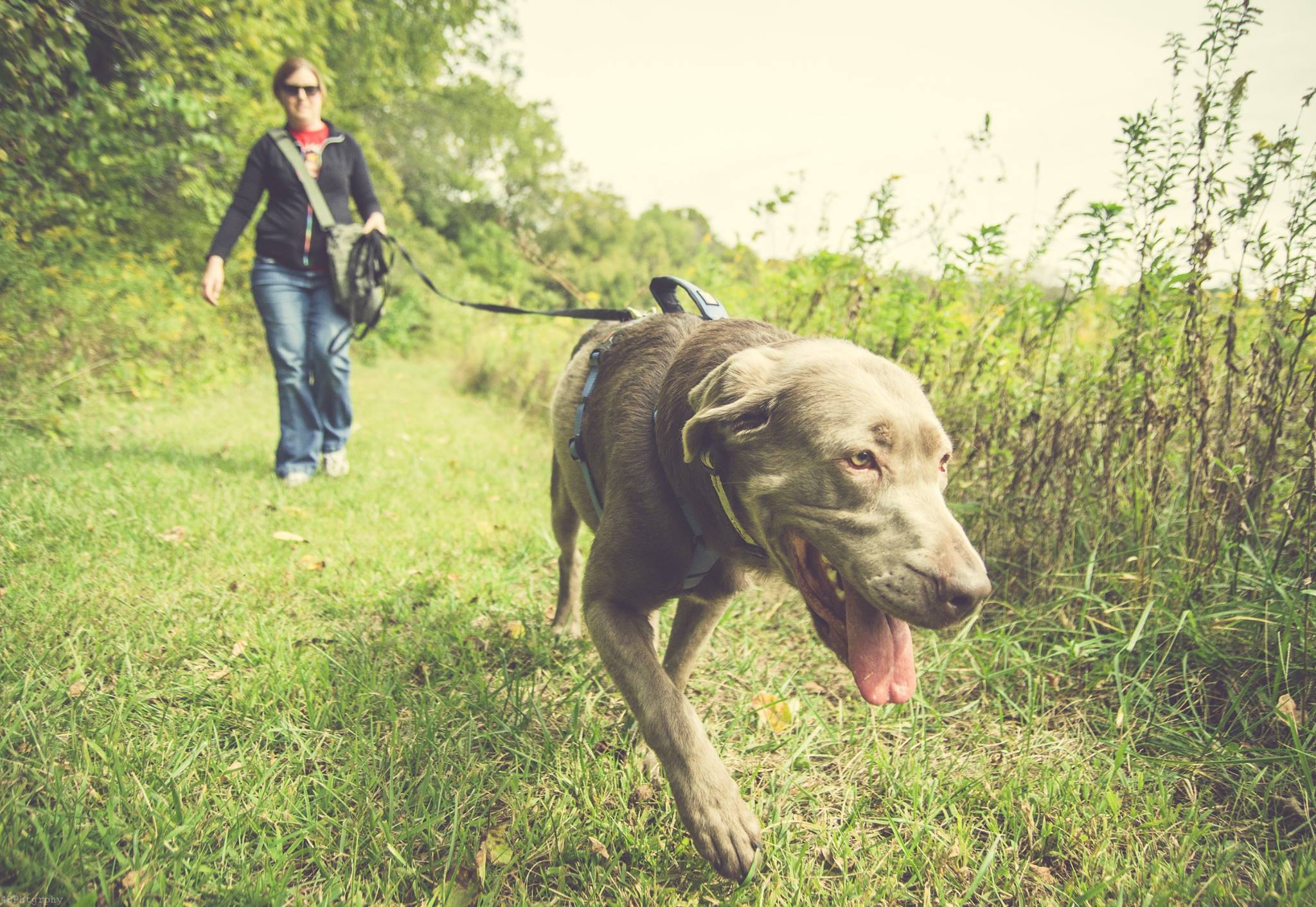 Brandi takes Sadie for a tour of her new surroundings.

Brandi said that Sadie was skinny from malnutrition, had lost a good portion of her hair, had some other problems. . . but my wife was in love. I wasn’t sold. We already have Fritz, who is a walking allergy. We talked for hours about the pros and cons of adopting a third dog. We’d tried earlier in the summer with another lab, and it was a disaster. The lab turned out to be aggressive, and my cats were in danger with it around. Needless to say, that lab lasted a weekend with us before the owner took it back.

I was spooked about having a dog of unknown history in my house again. I didn’t want to chance any accidents, but I agreed to do a trial run. Brandi filled out the application through the lab rescue, Central Indiana Lab Rescue and Adoption, and a few weeks later, on a Sunday, Sadie showed up for a house visit. As any good adoption group will do, the rescue folks wanted to meet us, see our house, and meet our dogs and cats. 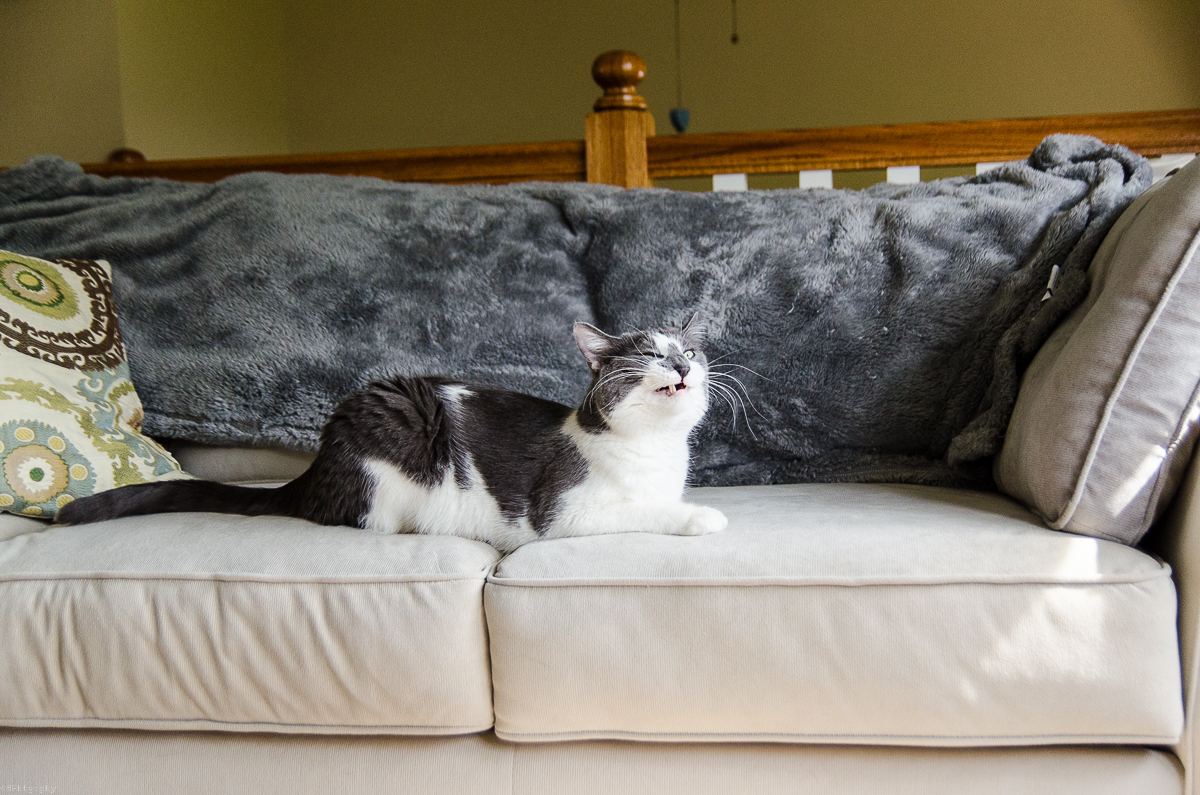 Derp the cat took to Sadie on the second visit, which was a great sign that she’d fit in as part of the household.

Sadie was in a strange place, but within an hour all three of the dogs were asleep on the floor. I took that as a good sign. If our dogs accepted her right away, there was hope. But the cats were the big issue. Derp hissed at Sadie and ran, which was totally expected. Loki hides from his shadow and has his own bedroom for him to feel safe in, so he was the least of my worries. Derp, on the other hand thinks he’s a dog.

Brandi was on vacation the next week, so Sadie came to stay for a few days. Derp met Sadie again and hissed at her and walked away. I was on edge, but Sadie never moved. The first night went pretty smoothly. Sadie was exhausted and slept right through it. Tuesday came, and when I got home from work, I sat with the dogs for a bit. Derp walked up and after a few seconds of pacing, nuzzled Sadie. I was shocked, but Derp is a good judge of character for a cat. I rescued him on a stream years ago, and he’s a hell of a cool cat. Sadie licked him, and suddenly I wasn’t so much on edge about their getting along.

The week flew by. Sadie went on daily walks, rides, hikes, and met a whole bunch of other dogs from the neighborhood and beyond. She’s got some work ahead of her, but I’ve seen a tiny bit of confidence coming out of her little shell. Basic obedience training has started, and we’ll be working to break her separation anxiety, but that will come with time. She’s had a rough four years. With us, the rest of her years will be spent living the good life with lots of love and attention right alongside Fritz, Finn, Derp, and Loki.

Check out Central Indiana Lab Rescue and Adoption or visit their facebook page. 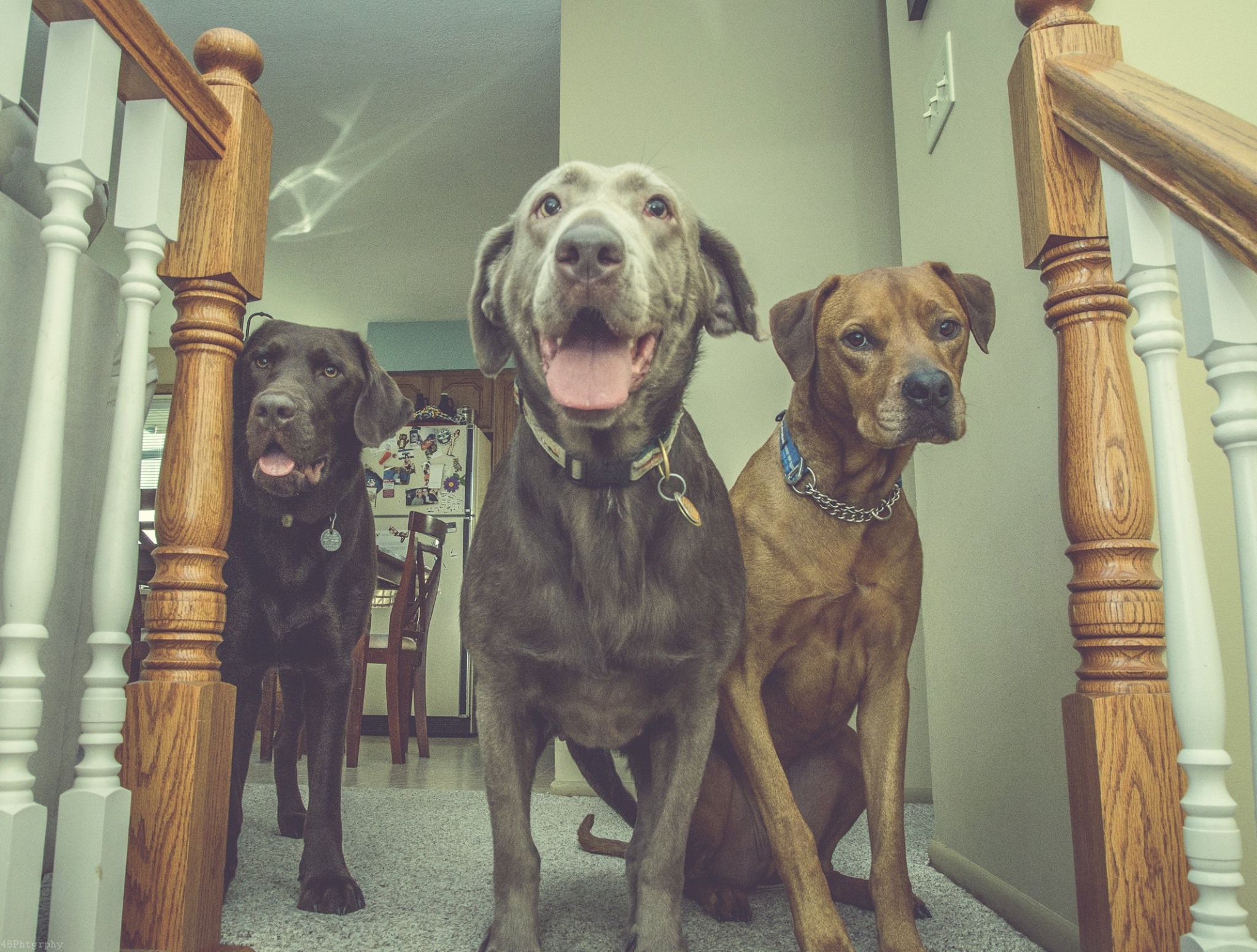 Sadie with her new pack—Finn (left) and Fritz.

Dave Hosler lives in Indiana and writes the Pile Cast blog about fly fishing and his dogs, Fritz and Finn. . .and now Sadie. He’s also a former Trout Bum of the Week.