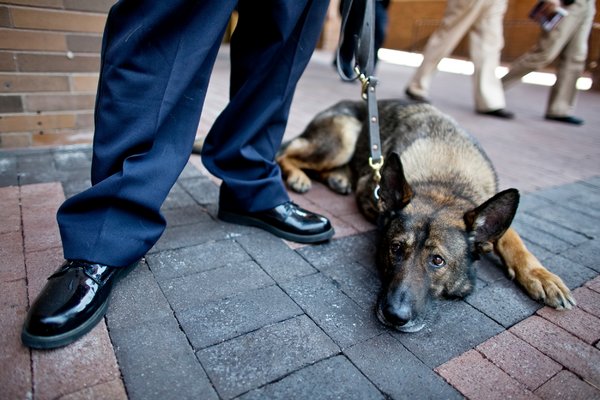 Bear is a gentle soul when he’s not on the job, he watches his partner’s back.
Photo via nytimes.com

A great story in the New York Times describes how Bear, a 6-year-old German Shepherd Dog who works for the New York City Transit Bureau, has become the toast of the town after his bravery in helping to break up a subway fight on Tuesday. On Wednesday, Bear and his handler, Officer Vincent Tieniber, made appearances on five different television shows and were interviewed by countless radio and print reporters.

Officer Tieniber said his partner knew the difference well. “At home he’s just like any other dog, hangs around, chews his toy, plays with kids,” said Officer Tieniber, who, like most handlers, takes his dog home in the off-hours. “But at work,” the officer said, “he watches my back, and I watch his. That’s pretty much the same with any K-9 handler around the world.”

Four of Bear’s teeth were cracked in the encounter, and he will receive caps for them next week. But for now, he and his handler are living in the spotlight. And when their fifteen minutes of fame are up, they will return to doing the important work they do every day. Bravo.