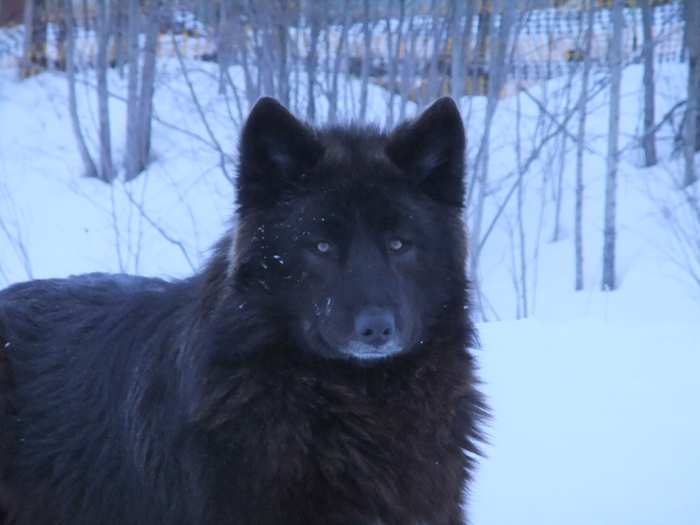 After years living in harsh conditions, Loki will have a warm forever home.
Photo via giftofloki.com

[Editor’s Note: We have posted many amazing rescue videos from Eldad Hagar of Hope for Paws, and here is an epic Facebook post from last week, detailing his trip to Canada to rescue one of the more famous strays in that country. It’s pretty incredible stuff. Let’s hope a video is forthcoming.]

For three years, Loki (pronounced lo-kai) lived outside in the freezing temperatures of Canada’s Northwest Territories, where temperatures in the winter can reach 50 below zero.

Loki, a wolf hybrid (half wolf, half dog), was just too scared, and wouldn’t allow anyone to touch him.
During these three years, two women—Bonnie Dawson and Bonnie C (I am not sure if she wants her name published)—fed him and gave him treats and toys (which he collected). They participated in different rescue attempts, but nothing worked.

Last week, I was contacted by many people here on Facebook, and I even got a phone call, asking if I could help. I quickly learned that Loki had 10 days to live before he would be shot by agents hired by the town of Hay River.

Things happened quickly from this point. I instructed the two Bonnies how to modify Loki’s behavior, and promised to get up there as soon as Loki exhibited the same desired behavior—walking into Bonnie’s garage to eat—two days in a row.

Fast forward three days: I took off to Canada, landed in Edmonton, continued to Hay River, and just eight hours later, we had Loki!

I slept in the garage with him (we both slept on top of a freezer). It was so cold, but it was so amazing to be with such a wild creature who was never handled by humans.

You can visit Loki’s Facebook page and see tons of photos of him. If you’re wondering why he is called the “Sole Survivor,” you can read Bonnie’s blog and learn about Loki’s life story.

I am going back to the garage for another night with Loki. This is the safest place for him (no windows, so he can’t do anything extreme to escape). The next few days will be so critical in surrounding him with so much love and getting him used to human contact. He will be living with Bonnie Dawson, and he has an amazing life ahead of him.

Thank you so much for supporting Hope for Paws and enabling me to save Loki. You can see a bunch of his photos on my Flickr page.