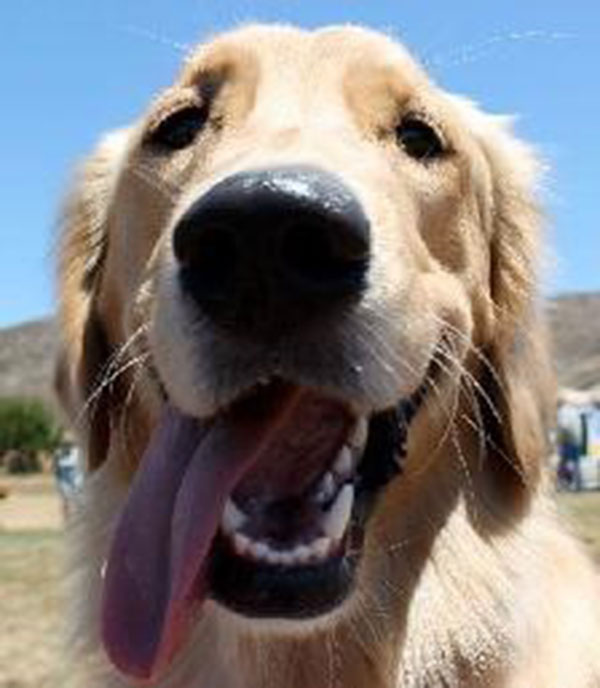 To Tracy and Andy Dauterman, Cami was no ordinary dog. As most Golden Retriever owners can attest, Cami was an adorable and rambunctious puppy who loved nothing more than to chase lizards and play splash in the pool, but wherever she went, Cami always seemed to attract the attention of perfect strangers that would admire her pretty and happy face.

“I used to tell everyone ‘every day is the best day of her life’ because it was. She was such a happy dog!” Tracy exclaims.

Then, in late July, Tracy and Andy noticed that their normally playful three-year old pup wasn’t acting quite like herself and that the lymph nodes under her neck seemed to be swollen. After promptly taking Cami to their veterinarian, Tracy and Andy learned that Cami had Lymphoma, a cancer of the immune system.

“Our beautiful and sweet young Golden Retriever was diagnosed with Lymphoma. Cami was only three years old, how was this even possible?” Tracy wondered. Tracy and Andy were beside themselves and to complicate matters, at the time of Cami’s sudden diagnosis, Tracy was eight months pregnant with their first child.

“We were so excited to be bringing home our baby boy to meet his ‘big sister’ Cami. She was going to be his protector, his playmate, his companion, his first pet.”

The last few weeks of Cami’s life were spent living life to the fullest – days at the beach, lots of lizard chasing and playtime with her best dog friends. Sadly, Cami’s health quickly declined and it devastated Tracy and Andy to see their spry pup no longer have the same zest for life.

As Tracy’s due date approached, Tracy and Andy hoped that Cami could hold on just long enough to meet her little brother and Cami seemed to know that she needed to stick around for just a little longer.

“Our sweet Cami Bear held on just long enough to meet her little brother. We brought him home from the hospital on Sunday and we made the decision to say goodbye to her on Labor Day Monday.” Tracy explains. “We always knew that saying goodbye to her would be tough, but we never imagined it would be so early in her life or that it would coincide with the birth of our first child.”

Heartbroken from their loss, Tracy decided to commemorate all of the happy memories they shared with Cami by starting a fundraising page in memory of Cami.

“I wanted to do something to turn this terrible situation into something positive. After hearing about the good things the Morris Animal Foundation is doing to study canine cancer, including the Golden Retriever Lifetime Study, I decided to start a fundraising page in Cami’s honor.”

Although Cami’s life was cut short, she truly made the best of every day and even her last day, when she met her little brother, was the happiest day of her life.

If you would like to help your pet live a longer, happier life, visit Morris Animal Foundation and learn how you help advance animal health worldwide.