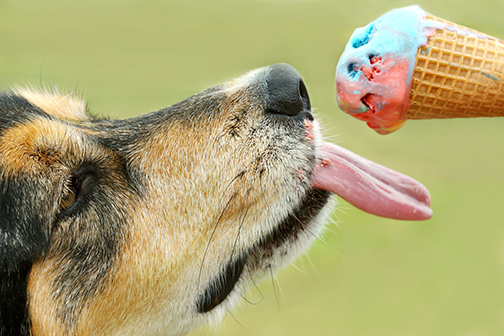 Are we being too good to our furry pals?
Photo by Morris Animal Foundation

Insulin: A century of treating diabetes

Almost 100 years ago, a team of Canadian medical doctors made an astonishing finding; a new hormone responsible for blood sugar regulation. Before the discovery of insulin, diabetes (a group of diseases that result in too much sugar in the blood) was a feared and fatal illness. The discovery of insulin revolutionized the treatment of diabetes mellitus in people, and within two years of its discovery insulin was available worldwide.

People weren’t the only ones benefitting from the discovery of insulin. References to treating diabetes in dogs go back to the 1940s and treatment options for dogs have advanced significantly in the last two decades. Insulin has been, and remains, a cornerstone of diabetes therapy.

Early insulin preparations were made as extracts derived from pork and beef pancreas. Today, commercially produced recombinant human insulin is the dominant form of insulin available, and is the primary type of insulin used to treat dogs with diabetes.

Unlike people, who get type 1 or type 2 diabetes, the disease in dogs defies easy classification. Many experts suggest dogs likely have an unrecognized pre-diabetic stage (much like people) followed by progression to overt diabetes. Canine diabetes behaves more like type 1 diabetes in people and requires insulin injections for treatment. The good news is dogs tend to tolerate injections well, and canine diabetes treatment has benefited from advances in human diabetes care, including improved insulin therapy.

If you have a pet with diabetes, or have diabetes yourself, you know there are many different types of insulin preparations. Sorting through all the options available can be daunting, especially as newer types of insulin are released, and older forms are either modified or taken off the market.

In general, insulin is divided into different types based on three characteristics:

1. How quickly the insulin begins to work once it is injected.
2. The time to peak insulin action.
3. How long the insulin lasts.

Based on these characteristics, insulin is often divided into the following four types:

1. Rapid acting insulins start to work within 15 minutes of injection. Activity peaks in one hour, and lasts for two to four hours.
2. Regular, or short-acting, insulins start to work around 30 minutes after injection, and their activity peaks two to three hours later. These insulins last anywhere from three to six hours.
3. Intermediate-acting insulins take two to four hours to start working. They reach peak activity in four to 12 hours, and last approximately 12 to 18 hours.
4. Long-acting insulins take several hours to reach the bloodstream but don’t have a peak in activity. They last 20 to 26 hours.

Morris Animal Foundation is committed to improving the lives of our canine friends through animal health research. Check out our latest studies, and learn what you can do to join us to improve the lives of dogs worldwide.