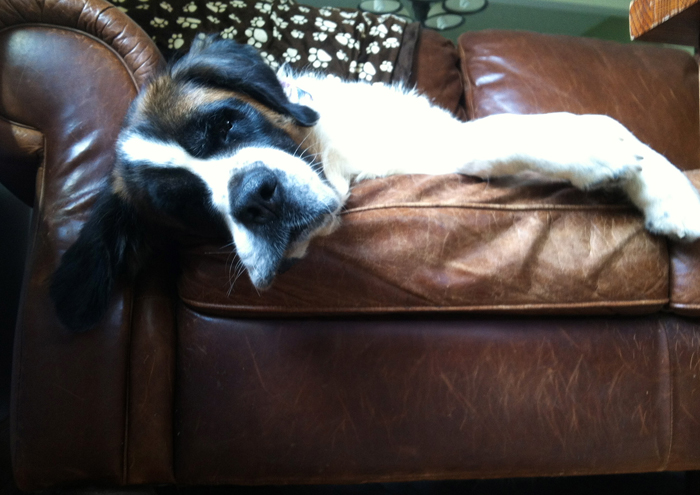 [Editor’s note: Orvis customer Jenny Lance sent in these great pictures and the sad-but-ultimately-heartwarming story of how Bernadette came to live with her.]

Bernadette was obviously someone’s loved dog at some point, because she was spayed, knew sit/shake/stay, was house-trained, and loves people, cats, and dogs. For a reason we will never know, she ended up lying in the middle of a remote country road in southern Ohio, weighing only 67 pounds! Her backbone was an inverted “V” on top of her back, and her hip bones were sticking out with sores on them. She had open sores on her legs and pads, fly-bitten ears, fleas, raw-and-red skin, and barely any fur. When some gals I know came upon her during a walk, she couldn’t even get up. They ran home (one being pregnant!) to get their car. They returned, picked her up, and took her home. 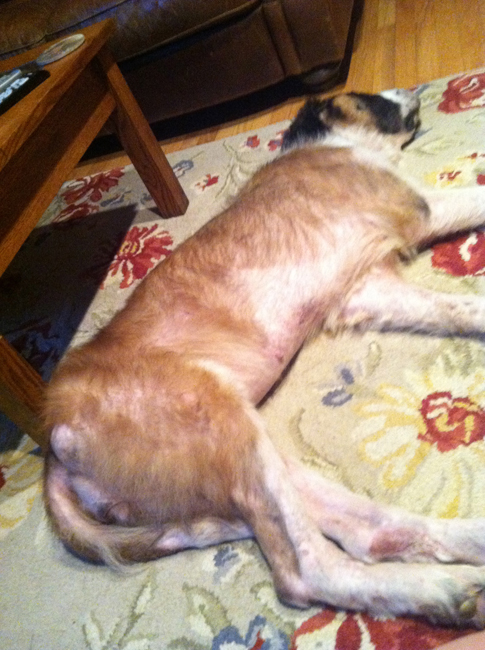 She was skin and bones when she was first found in the road.
Photo courtesy Jenny Lance

Since I am involved in our local dog rescue efforts, one of the women, Lizzie, called my home. I was out of town, so my husband gave her another volunteer’s name and number. My friend, Karen, took in Bernie and named her St. Bernadette (the Patron Saint of Healing). After “Bernie” had spent a few weeks at Karen’s, I took over her fostering. I did show her to potential adopters, but having grown up with a Saint Bernard as a child, I have a special place in my heart for the breed and decided I could not give her up. I officially adopted Bernadette, and she has blossomed into a gorgeous, healthy 120-pound, fluffy, ball of love! 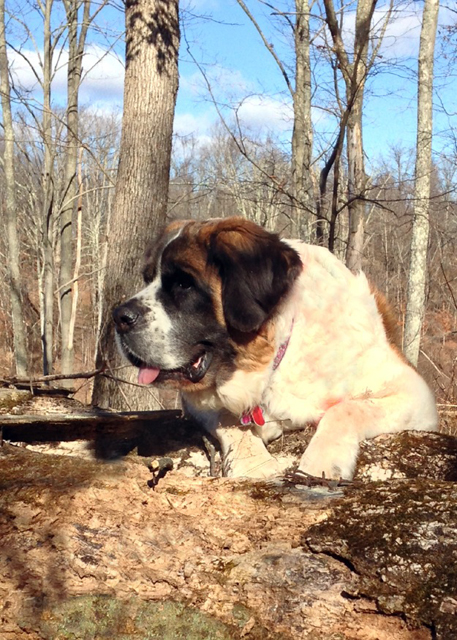 For quite a few months, she didn’t have the strength or endurance to go on hikes up our hill with me and my Chocolate Lab, JJ. She is now able to enjoy wonderful hikes and to chase JJ around the yard. (But she can’t catch him!) I am pretty sure she was a city dog that someone dumped in the country, because she does not leave the yard, even though we have hundreds of acres and has been off leash when I am outside since day two. She is tentative about ditches and creeks yet and apparently could not fend for herself, considering the condition in which she was found. Sometimes you wish you could know the dog’s story, but sometimes I don’t know that we could handle it with the grace they do. 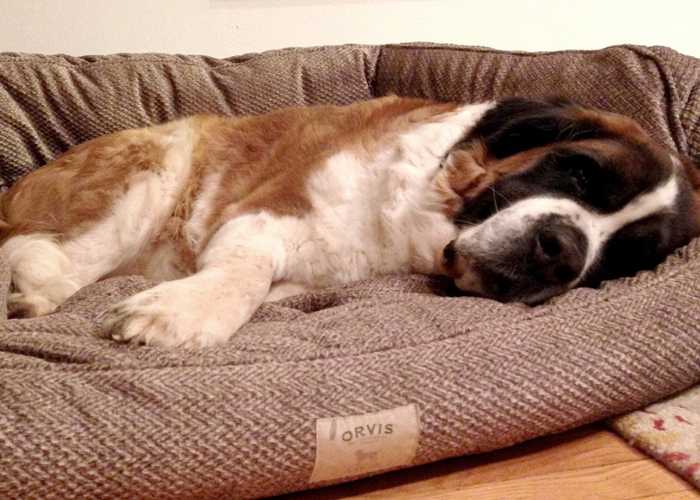 It’s amazing how a loving home can bring a dog back from the brink.
Photo courtesy Jenny Lance

Bernadette is a wonderful addition to our family and we love her very much. She loves her Orvis Bed (and our couch!)

5 thoughts on “Orvis Dog of the Day: Saint Bernadette the Rescue!”