While dogs can make wonderful presents, there are potential problems, as well.
Photo by Jill, Oconomowoc

While conventional wisdom suggests giving a dog as a Christmas present is ill advised, a new way of thinking is gaining momentum, supported by research that suggests a puppy-as-present may not only be okay, but could ultimately help more shelter dogs find forever homes. Does a dog make a good present? If you’re thinking of giving a puppy or a dog to a child or other beloved family member or friend this holiday season, here are some compelling findings that might make you smile.

A 1999 study by J.C. New, et al. (Characteristics of Shelter-Relinquished Animals and Their Owners in U.S. Pet-Owning Households) showed that some 2,600 dogs relinquished to 12 animal shelters in various regions of the country most often came from friends, shelters, and breeders. Only rarely had any of these dogs been received as gifts, and rarely had they come from pet shops or veterinarians. In short, the odds were higher a dog was surrendered to a shelter when acquired from a shelter, from a friend, as a stray, or from a pet shop, than when received as a gift. 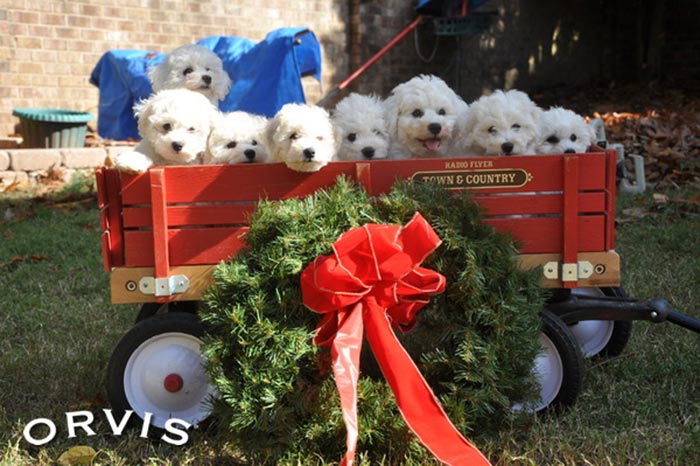 Making the Case for a Holiday Dog

In 2013, scientist and animal welfare advocate Emily Weiss, et al. reported findings after surveying 1,006 pet owners, looking more closely at 222 who responded ‘yes’ to the question, “Have you received a pet dog or cat as a gift in the past 10 years or so?” Of the 121 respondents who said they were surprised (had not been consulted) but were comfortable with the surprise, roughly 60% said their love or attachment to the pet had increased. Only 4% reported their love or attachment had decreased, with the remainder reporting no change. In the same group of respondents, only 12.5% of pets were rehomed—the balance of pets remained in the home.

Seventeen respondents said they were surprised, but wish they had been involved in the decision—still, about 65% of those people reported their love or attachment to the gifted pet had increased, and there were none for whom it had decreased. Among these 17 respondents, roughly 75% reported the gifted pet remained with them, and 6% had rehomed the pet—do the math and you’ll find that amounts to only one surrendered pet.

The survey results support the earlier findings of the New study: there is no significant relationship between pets received as gifts, and whether the gifted pet was kept by the family over the long haul, as reported at the time of the survey, nor did the survey show a negative impact on the animal through an altered bond with his human family. In a nutshell, the Weiss research concluded pets given as gifts have no greater risk of abandonment than other pets. Nor did research by the American Humane Association in 2013 establish any increase in surrender rates by people who received gifts over people who acquired an animal after careful reflection.

The Weiss survey authors go so far as to suggest animals obtained from shelters are at greater risk of return than animals obtained as gifts, possibly paving the way for shelters to reconsider their policies and allow pet adoptions to people who plan to gift an animal—which ultimately may allow more animals in shelters to find permanent homes.

Giving a Dog as a Gift—Responsibly

While it’s unclear based on the available statistics, animals given as gifts may be relinquished for alternate reasons, including allergies, not enough time, or the cost of care. Similarly, there may be a higher rate of return to shelters than gift dog relinquishments, as shelters often require the adopting family to bring back an animal if the adoption doesn’t work out. Animals given as presents may then be rehomed by the family rather than through a rescue. Overall, when gifting pets, if done responsibly, everybody wins.

The historical argument against giving a dog as a gift typically includes the notions that a pet shouldn’t be an impulse purchase; that a person shouldn’t be caught off-guard and instead should be included in this big decision; that owning a pet is a huge commitment and thus too much to foist onto a person; and that pet ownership is expensive. But maybe dogma’s not so good for dogs after all. Giving the gift of a dog this holiday season might—or might not—be appropriate, depending on individual circumstances. And when dog-as-gift does make sense, it appears the dog isn’t any more likely—and perhaps is even less likely—to end up surrendered to an animal shelter as compared with a dog acquired by other means.

But Should You Wait to Give a Dog ‘Til the Holidays End?

Maybe. The holidays are a notoriously stressful time of year for people and animals, and a potentially confusing time to introduce an already-bewildered dog into a hectic household—it’s an oft-cited reason for waiting. Some dogs might appreciate coming into the fold of a new family when the excitement of the season has died down and the household guests have gone home. You can still announce the gift of a dog during the holidays, and indicate your intentions to go and help get him after the dust settles; choosing a new dog will be a celebratory occasion in its own right.

It’s more satisfying for the giver to observe the joyous reaction of a child or loved one surprised by a live puppy or dog to be sure, but in the long run some folks—human and canine—might benefit from a heads up. Impulse shopping can end badly, whether it’s overspending on tchotchkes you didn’t need while you’re were waiting in a long department store queue, or snapping up a puppy from the cardboard box outside. Not everybody wants a dog—unless you really know your audience, it might be best to find out before you adopt or buy one to give as a gift.

Once your recipient has made it known he or she wants a dog, you can make a showy surprise gift of a dog without the dog at all. Here are three gift ideas:

In each of these scenarios, the recipient has the chance to reflect some about accepting or declining the gift, and has an ‘out’ if they decide against it. Extending the invitation to meet potential pups brings its own brand of excitement. Enjoy the anticipation as you meet and play with prospective furry family members, together. This way, the giftee can meet different dogs to find the personality, energy level, and size that suits them. And don’t pass up older dogs: An adult dog will spend more time waiting in a shelter than fluffy puppy. The recipient may be more interested in a mellow five-year-old Labrador Retriever than an energetic puppy with a chewing habit.

How to Know Whether Your Family Is Ready for a Dog

Are you ready for a dog? Have a family pow-wow and talk about the work and responsibilities tied to dog ownership—daily feeding and exercise, veterinary bills, inevitable messes, et al. Try to gauge your recipient’s enthusiasm and willingness to assume these responsibilities, or at least to help with them. Ask hard questions:

Answer these questions honestly and get everybody in your family on the same page. Then ‘surprise’ them with a new dog. If you’re not purchasing a puppy or dog from a reputable breeder, consider adopting one through a local rescue or animal shelter: these organizations are in the business of finding good homes for companion dogs—not making money. And you’ll discover many pure breeds at shelters. Try our Dog Breed Selector and learn more about a breed that might make a good fit for your family and lifestyle.