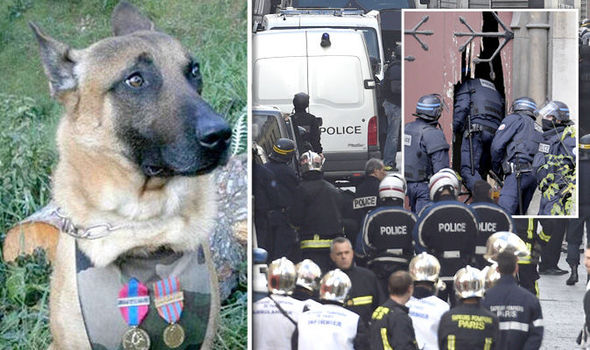 Hero dog Diesel, pictured with her service medals, died in the Paris raid.
Photo via express.co.uk

UPDATE: Initial media reports identified Diesel as a male dog, but as reader Rita Anderson pointed out on Facebook, Diesel was, in fact, a female. This post has been edited accordingly.

We post frequently about the incredible work that police dogs perform every day, and today we are reminded that these brave, loyal dogs sometimes make the ultimate sacrifice. As French special forces raided an apartment building this morning as part of their investigation of last Friday’s terrorist attacks in Paris, a seven-year-old Belgian Malinois named Diesel was killed in the line of duty:

The brave dog was reportedly the first to be sent into an apartment, which was used by at least six jihadis in the run up to the attacks, to assess the level of danger before they stormed it.

Reports suggest Diesel was killed when a woman, said to be Abaaoud’s jihadi bride, fired an AK47 at police before blowing herself up with a suicide belt during the anti-terror operation.

Tributes to Diesel have been pouring in from around the world today, as people recognize her valor in the line of fire. Rest in peace, girl. You will not be forgotten.

Click here for the full story and more photos of Diesel.

3 thoughts on “RIP Diesel, A Brave Dog Who Gave Her Life in the Fight Against Terrorism”