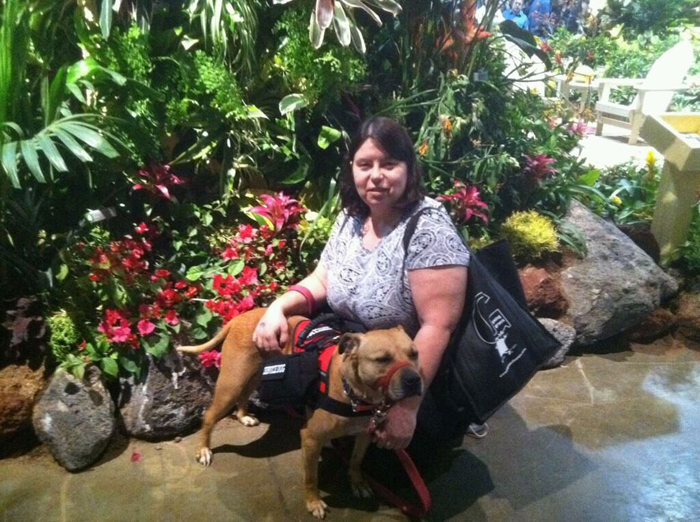 [Editor’s note: Yesterday’s story about the man who was kicked off a flight because of his guide dog elicited a slew of comments. Sharon McCuddy posted this information-filled essay, so I asked her if I could use it as a post to ensure that more folks see it.]

My experience flying two long non-stop flights on US Airways with a service dog in training was mostly good. Philadelphia’s TSA was awesome and did everything properly. After we settled in for the flight (in the bulkhead seats, which I had requested when I purchased my tickets) and got into the air, one of the flight attendants tried hard to get my dog to break from her down-stay at my feet. The attendant took the demonstration oxygen mask, reached over into our row, dangled the mask up and down above my dog’s head like a toy, trying to entice her to leap up and snatch at the mask. My dog did the correct thing: she checked with me visually for guidance; I gave her a subtle hand signal to stay down; and she stayed down, merely watching the mask being dangled up and down above her head. After a couple of minutes of this, the flight attendant realized that my dog wasn’t going to break protocol and gave up.

As soon as the attendant gave up, I quickly rewarded my dog. It could be that the flight attendant honestly didn’t realize what she was doing was wrong (interfering with a service dog without cause is a federal offense). I will say that the rest of our outbound flight was fine, and the return flight went quite well.

Let me help correct some misinformation. By Federal Law under the ADA, a Service Dog may go almost anywhere their person goes, with very few exceptions: Operating/Surgical room (sterile environment); in the actual water of a pool or water park that does not allow dogs otherwise (example, a hotel pool; but the dog may sit, stand and walk along the edge of the pool with their person if his person is near the edge; the dog may also stay by his person’s sitting area while his person is in the pool); and the kitchen area of a public restaurant when the kitchen area is segregated from the customers. A Service Dog may also be excluded for safety from certain activities if a business can not provide for the dog safely, such as a roller-coaster.

That said, a Service Dog may otherwise go anywhere his person goes, unless the dog is acting in such a way that is either aggressive, uncontrolled, or overtly detrimental to the activity of a place of business through overt actions—such as loudly barking (and not stopping) during a movie, dashing up to patrons’ tables at a restaurant, urinating/evacuating in a non-designated area of a business, etc. Most Service Dogs go through extensive training to prevent such incidents, of course, but it is wise to remember that they are not robots nor machines, but animals. The owner should be given the chance to correct the issue.

The disability that the dog helps to mitigate can be physical, emotional, intellectual, or any combination. To meet the Federal law, the dog must be trained to respond to at least one need of their person. An individual person may have more than one service dog with them. For States that extend the Federal law to Service Dogs in training, the dog merely needs to be generally well-behaved and under the control of the person training the dog.

In this case, I think US Airway’s flight attendant erred. She should have asked for the owner to ask his dog to back up slightly so that his paws were not in the aisle. As far as the dog becoming a projectile in case of problems in air (such as extreme turbulence), the position of the dog’s paws have nothing to do with that. The attendant should have verbally informed the individual and provided assistance, if requested by the person, to help position his dog’s paws safely out of the aisle, since the person in this case was blind and could not have seen this for himself. The dog’s paws do not belong in the aisle; anyone walking in the aisle could step on the dog’s paws or if the attendant was planning to bring the food service cart down the aisle (since the flight was delayed on the tarmac), they may have been concerned that the cart’s wheels might have hurt the dog. Those are valid concerns, although most service dogs will be smart enough to pull their paws in if a cart is approaching.

As far as the dog being required to be under the seat, the attendant was flat-out wrong. That is the requirement for non-service dogs when an airline allows for small dogs to be in the cabin. It does not apply to service dogs, who need to have unfettered movement to perform the tasks for which they have been trained (or are in training for).

Sharon McCuddy lives in Chester County, Pennsylvania. She is a Business Analyst who is a freelance writer in her spare time, along with enjoying her family, pets, and now-retired service dog, Lucky.