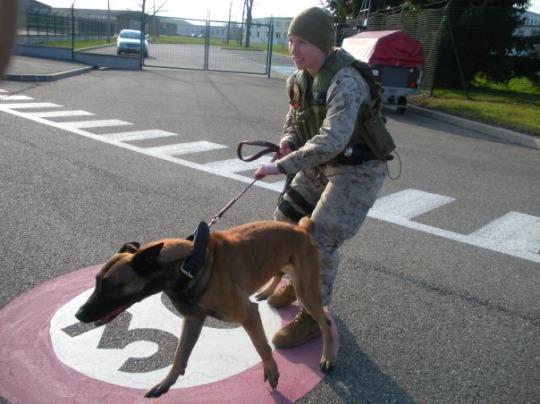 When a human retires from the American military, he or she is guaranteed a lifetime of healthcare through the U.S. Department of Veterans Affairs. Military working dogs, however, receive no such benefits. In fact, once a retired MWD is adopted, the government washes its hands of responsibility of any kind. Charlsie Hoffman, adopted a Belgian Malinois named Baddy—a former member of Marine Corps’ HMX-1 canine squadron, which guarded the presidential helicopter—only to find that he was suffering from prostate cancer. The best treatment is very expensive, and Hoffman believes that the government should have repaid Baddy for his service.

But as soon as Hoffman adopted Baddy, the government stopped supporting him — the same as any other retired MWD. No transportation from the HMX-1 kennel in Quantico, Va., to a base closer to his new home in Los Angeles. No medical coverage to defray the cost of treating the hip dysplasia he’d developed while in the Marines. And certainly no $12,000 for combating the cancer that was now killing him.

The article below is long, but it’s well worth your time to read: both to honor Baddy and to look forward to how this system can be changed.

One thought on “Should the Military Provide Lifetime Care for Retired Service Dogs?”