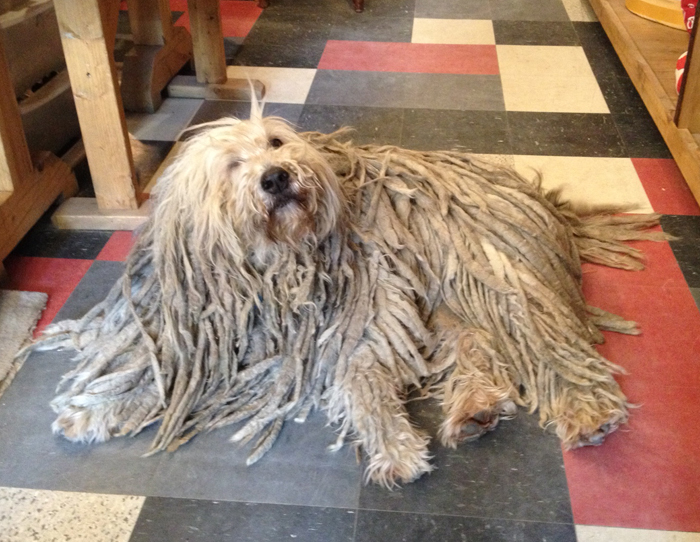 Only five readers correctly guessed Aria’s breed, as most thought she is a Komondor.
Photo by Phil Monahan

Last Friday, we posted a photo of the lovely Aria and asked you to guess her breed for a chance to win a new collar. Astonishingly, our very first response, from Lori Guess, was correct, but the vast majority of those who followed believed she was wrong. (The other correct guesses came from H. Gillison, Linda Hills Malaussena, Suzy Higgins, and Debbie Garrett.) Aria is, in fact, a Bergamasco Shepherd. Here’s the description from Wikipedia:

The Bergamasco is used in herding and guarding sheep and cattle. This ancient dog breed is found in the Italian Alps, especially in the region of Bergamasca valley. The Bergamasco should be a medium size dog, well-proportioned and harmonious, having a rustic appearance. The Bergamasco has a square body. It is a solidly compact dog with a strong, powerful build that gives it great resistance without taking away any of its agility and speed of movement. Males weigh 32–38 kilograms (71–84 lb) and females weigh 26–32 kilograms (57–71 lb). Their height is around 54–62 centimetres (21–24 in) and the life expectancy is 13–15 years. The rims of the lips are well pigmented. Scissor bite. The skull is broad and the eyes are dark chestnut color, ears are set high. The back is straight, well-muscled. The coat is dense abundant, long and dense, and the texture is harsh. The undercoat is short and dense. Muscles are well developed. In action the dog wags his tail. This breed dog can easily run long distances for a comparatively long time.

The vast majority of commenters guess Komondor, which is a Hungarian Sheepdog that has a similar-looking coat, as you can see in the photos below. Click here for a comparison of the two breeds. Several others guessed Puli, another Hungarian breed with a long coat but much smaller than either the Komondor or Bergamasco.

The randomly chosen winner of a free Personalized Side-Release Buckle Dog Collar is Beverly. She guessed Puli, but she still gets the prize. Thanks to all who played! 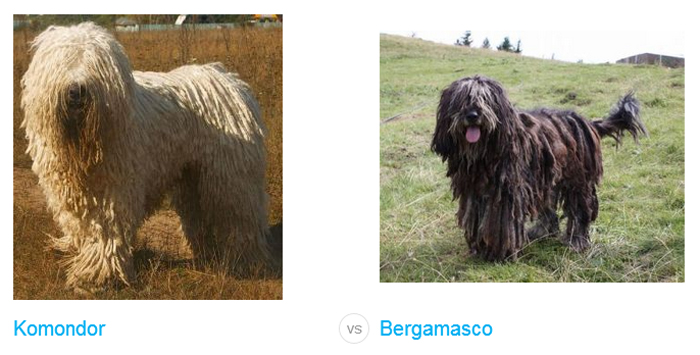 The Komondor and Bergamasco are similar
Photo via dog-breeds.findthebest.com