This is one story that doesn’t seem to be going away. Reporting in The New York Times, David M. Herszenhorn focuses on a different group working to save the dogs of Sochi, which have been sentenced to death by Olympic officials. The stories of what has already occurred are shocking:

In recent months, residents of Sochi have reported seeing dogs shot with poisoned darts, then tossed into waiting trucks. Aleksei Sorokin, the director general of a pest control business, Basya Services, has confirmed that his company has been hired to catch and kill strays, telling local journalists the work was necessary.

But, as we posted yesterday, these dogs do have advocates. The ones profiled in The Times also benefit from some very powerful backing:

“We were told, ‘Either you take all the dogs from the Olympic Village or we will shoot them,’ ” said Olga Melnikova, who is coordinating the rescue effort on behalf of a charity called Good Will, which is financed by Oleg V. Deripaska, one of Russia’s billionaire oligarchs.

This is a fascinating article that shows how all the forces in play interact. Let’s hope as many dogs as possible are saved from a gruesome fate. 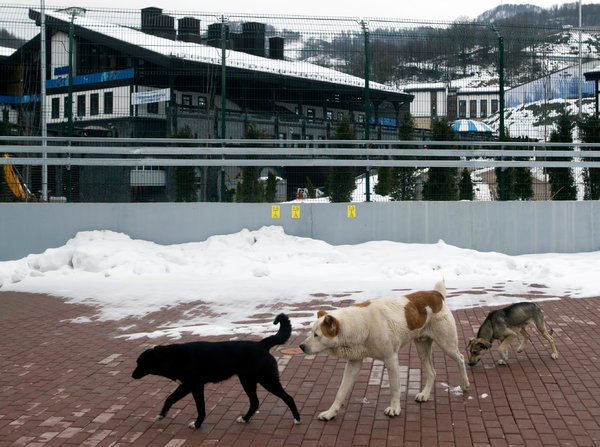