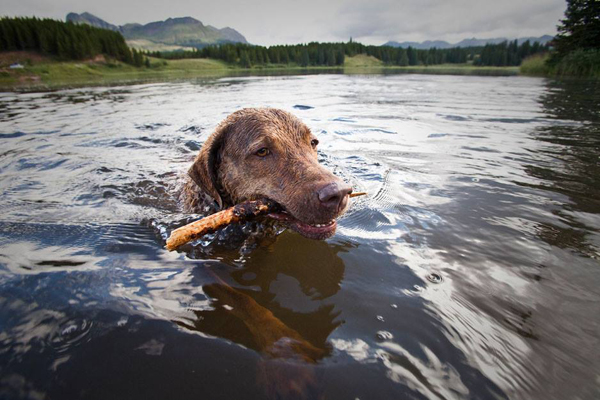 A happy, healthy retriever, doing what he does best!
Photo by Morris Animal Foundation

Three Morris Animal Foundation researchers recently got a little closer to predicting if a dog has an increased risk of cancer in a project dubbed the MADGiC study (Making Advanced Discoveries in Golden Cancers). The scientists worked together to look for a link between cancer development and a dog’s genetic makeup, focusing on golden retrievers, a breed with an unusually high incidence of cancer.

The study team spent three years looking for high-risk genetic markers associated with hemangiosarcoma and lymphoma, two of the most common and deadliest cancers diagnosed in golden retrievers. What they uncovered created a buzz in the research community. Two specific gene regions appeared to be linked to both cancers. Now that these candidate regions have been identified, researchers hope to test more golden retrievers with and without cancer, to see if these observations remain valid in a larger population of dogs. Once validated, a genetic test can be developed to identify individuals at higher risk of disease, similar to breast cancer screening tests in women, and guide breeders in selecting dogs with lower cancer risk for breeding programs.

Though focused on golden retrievers, the study has potential to be a win-win for all dogs, purebred and mixed breeds alike. Focusing on a single dog breed cuts out “genetic noise”- multiple versions of the same genetic material – that is common in mixed-breed dogs. Eliminating the noise allows researchers to pinpoint genetic regions and mutations associated with disease more quickly. Once researchers narrow down a genetic region of interest, they can start looking at other dog breeds for the same change. The process of genetic testing can take years to complete, but once done can be an invaluable tool for diagnosis, and essential guide for developing new cancer-targeted treatments. MADGiC indeed!

Orvis supports the Morris Animal Foundation’s canine cancer research through its Cover Dog Contest. Thanks to the generosity and enthusiasm of Orvis’ customers, to date the contest has generated over $1,000,000 to fight canine cancer.