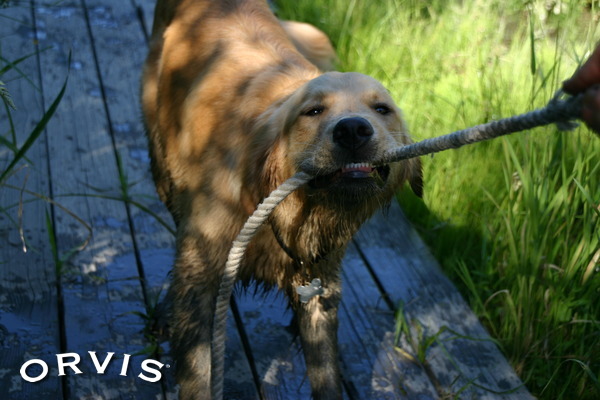 Owen, like many dogs, loves to play tug of war.
Photo by Anne, Portland

Regular play with your dog is important for both of you. It ensures that your dog gets the exercise he needs, prevents boredom, and reinforces obedience training and communications skills. Also, humans and dogs are social creatures, and play helps deepen the bond between you and your furry friend. Finally, it’s fun as heck. But along with the countless positives, safety issues can surface when your best friend carouses with you or other dogs. Read on to learn how to ensure playtime remains the joyful interaction it’s meant to be.

Teach Your Dog the “Leave It” Command
When your dog responds to “leave it” without fail, you are well on your way to a lifetime of peaceful play together. Your dog can use play to make a bid for dominance; if you can tell your best friend to set down his favorite dog toy or a stick—and he does so—you can feel confident he knows you’re the leader of the pack.

Take “Time Outs”
Whether you are playing with your dog alone or with other furry friends, keep an eye out for signs of over excitement or aggression in your dog. When you pick up the ball for a game of fetch or approach the dog park, your dog should be fairly calm. If he is yanking on the leash or barking uncontrollably, say “oops” and put the ball down or turn around and walk away from the park. Let a little time pass before you try again. Soon your dog will learn to maintain control before and during play. If your dog ever instigates a scrape with another dog, however, end the play immediately. In this case, you may need to slowly retrain and socialize your dog before returning to the dog park.

Check the Dog Toys
Any dog toys in heavy rotation should receive a once over before each play session to be sure they are in one piece. Your dog may have nearly chewed off a section of tennis ball, or his favorite squeaky toy may be about to lose a limb. Even though you’ve gotten the rugged dog toys built for exuberant play, sharp teeth, slobber and head shaking will eventually break down even the toughest toy. Small pieces that become dislodged from toys turn into choking hazards for your dog.

Learn Your Dog’s Play Style
Some dogs love to chase more than anything. For them, games of fetch are the way to go. He can chase anything, even you, as long as he exhibits zero aggressiveness when he catches you. Don’t chase your dog, however, because he may think you’re playing each time you move toward him and dash away in situations where it’s dangerous to do so.

Other dogs are crazy for hide-and-seek games. Train these furry detectives to sit patiently while you hide yourself, a dog toy, or a treat somewhere in the yard and then let them free to search. And still others love to pounce on things and will appreciate squeaky toys they can attack. If your dog is older, a short-legged breed, or has joint pain, keep the play sessions shorter and watch for signs of fatigue or pain.

Be Wary of Roughhousing
It’s a strong temptation, but rough-and-tumble play should usually be avoided between humans and their dogs. Pushing your dog around playfully, rolling around on the floor with him, or accidentally hurting him during roughhousing can trigger aggressive or self-protective responses in even the most placid dogs. And when you’re down on the ground, you’re more exposed to those sharp teeth. Especially if you have children, avoid any rough play with your dog. Kids will want in on the fun and won’t understand why you can and they can’t.

Rough play is to be expected between some dogs. Just keep a close watch on boisterous play to make sure the game doesn’t evolve into aggression, or one dog is having fun while the other wants to escape.

Tug of War is Okay
Some people avoid tug-of-war games altogether because it is by nature a dominance contest. But Tug of war is a favorite for many dogs, and with clear rules in place, it can be enjoyed without worry. Caveat: It is never a good game for dogs who exhibit aggressive behaviors. Tug-of-war toys should always be kept out of sight until it is time to play. You should always initiate these games with the designated toy, so your dog doesn’t think he can grab the end of the dish towel you’re carrying to start a game. Don’t let your dog grab the toy until you say “grab it.” Your dog should drop the toy the moment you give the command. If he makes contact with your skin during the game, say “oops” and end the game immediately, put the toy away and play again another day.

Take Water Breaks
Play is a form of exercise and you and your dog need to stay hydrated. He’ll be having too much fun to stop, so it’s up to you to insist on routine water breaks. Bring a bowl of fresh water to the back yard, or bring a travel dog bowl or water bottle to the dog park or the field where you play catch and retrieve. Give him frequent water breaks in hot weather, but he’ll need to drink water in the winter too because exertion in any weather can cause dehydration.

Figure out the games, toys, locations and furry pals that work best for you and your dog and then get out there for some exuberant fun. Every day. Multiple times a day. Because the number one rule about playing with your dog is simply…to play.

Do you have strict rules for playtime with your dog? Or do you take an anytime, anywhere, anything goes approach to play? We’d love to hear your story in the comments.

One thought on “Tips for Safe Play with Your Dog”