[Editor’s Note: During this first full week of 2014, we’re counting down the Top 10 Posts of 2013. We’ll repost two per day, leading up to our announcement of the most-read post, on Friday. So stay tuned all week to see what resonated most with Orvis Dogs readers last year. Here’s #1, the most-read post of the year, about a blind man’s struggle with an airline’s treatment of his service dog. This one clearly struck a chord.

Thank you all for reading and participating in the Orvis Dogs blog. 2013 was a great year for us, and we hope to keep the momentum going, with your help.]

Here’s an remarkable story about people standing up for a blind man’s service dog. When a U.S. Airways flight attendant claimed that Albert Rizzi’s guide dog was not “stowed properly” after an hour delay on the tarmac and started giving him guff about it, his fellow passengers took his side. Amazingly, this resulted in the pilot turning the plane around and the airline cancelling the flight.

“When we, the passengers, realized what was going on, we were, like, ‘Why is this happening? He’s not a problem. What is going on?'” said [passenger Frank] Ohlhorst. “And we all kind of raised our voices and said, ‘This is a real problem.’ The captain came out of the cockpit and he basically asked us all to leave the aircraft.”

The airline instead bused the passengers from Philadelphia to Islip, New York, which was the flight’s destination. The bus trip took three-and-a-half hours, whereas the flight would have been under an hour.

One would think that if the flight’s passengers are willing to be that inconvenienced to stand up for Rizzi, the airline would realize that the flight attendant was in the wrong. Nope. They claim that the unrest by the passengers created a safety hazard. 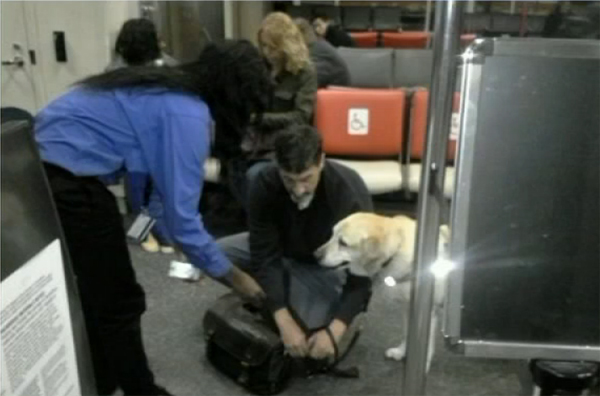