Editor’s note: By now, you’re accustomed to seeing the wonderful photographs of older dogs by Jane Sobel Klonsky, which are part of her Project Unconditional. Jane’s daughter, Kacey, has been making short films that focus on her mom’s subjects. (See Laura and Ol’ Red, Walter and Mary, Lacy and Sister Electra, “Better than Birthday Cake,” Spur Girl & Mollie, Rescued by Love, It’s a Family Affair, Eno & Linda, and Everything’s Bigger in Texas.)

Debbie Moderow moved to Alaska  years ago and fell in love with sled dogs after adopting a 7-year-old Alaskan Husky named Salt. Since then, her life has revolved around her sled dogs.  In Kacey Klonsky’s most recent video,  Debbie tells us about Spot and Lightning, two now-retired members of her team, and about the bond with her dogs that comes from spending miles together on the trail.  Dogs have changed Debbie’s life; “They have given me the story of my lifetime.”

Debbie’s memoir, “Fast into the Night: A Woman, Her Dogs, and their Journey North of the Iditarod Trail” is being released by Houghton Mifflin Harcourt  in February. 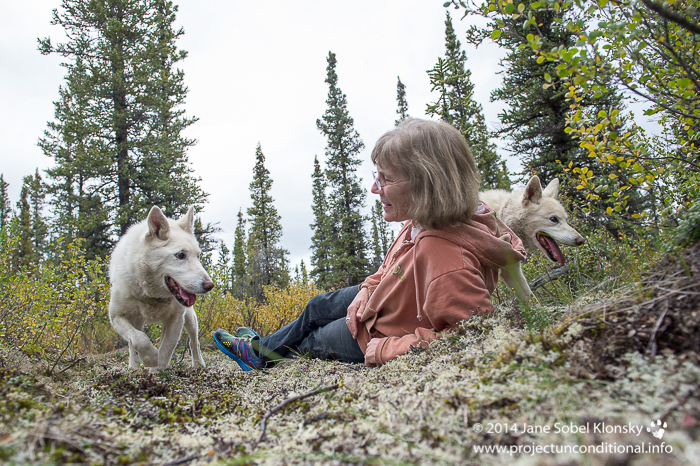