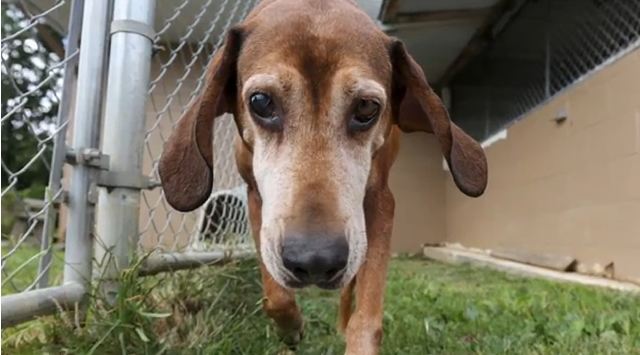 Dan the dog is still looking for a forever home.
Photo via Cincinatti.com

Dan the coonhound has a face that would melt anyone’s heart. Sadly, poor Dan has had a rough go of it. Rescued from almost-certain euthanasia at the pound after being picked up by Animal Control in 2004, Dan was taken to the Highland County Humane Society in Hillsboro, Ohio … where he still is today!

Dan has been placed in various homes, but it has not worked out either because he does not get along with other animals and children or because the owners were not living up to their end of the deal (one family kept Dan on a chain outside). So, Dan resides in the only real home he’s ever known – a kennel in the no-kill Highland County Humane Society with his “foster person” Melanie.

Some local residents feel this is cruel, and that Dan should be put down. Having rescued a beloved pet from just such a circumstance many years ago, this blogger must say she doesn’t agree. You never know when the right person with the right forever home might come through that door ready to give precious 13-year-old Dan some of the best days of his life. Maybe his new-found internet fame will help that right person come along, so share his story Orvis Dogs readers!

Perhaps that’s a biased opinion – what do you think? Is it cruel to let Dan live out his days in a shelter?

Watch the video and read the whole story here.