One of the more amazing things about dogs is that they seem to have no prejudice of any kind: they can develop deep relationships not only with humans, but with many other species, as well. We’ve featured stories about dogs and elephants, dogs and hippos, dogs and horses, and on and on. Here’s yet another wonderful example of how two seemingly unlikely animals have become best pals.

When Jag, an orphaned jaguar, was brought to South Africa’s Akwaaba Lodge and Predator Park, he needed companionship, so caretakers introduced him to Bullet the Jack Russell Terrier. Soon the pair were inseparable. . .literally. Once the jaguar had grown big enough to require his own enclosure, Bullet was not allowed in at first. But both animals let it be known that they needed to be together.

It’s an extremely sweet story and shows just how boundless a dog’s capacity for love is. 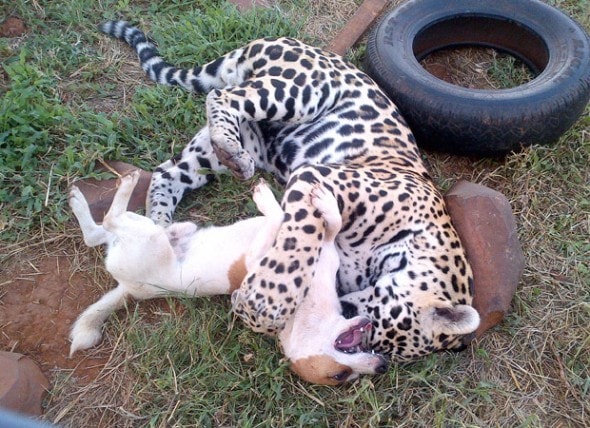