You don’t hear a lot about javelina attacks, but these can be vicious animals. A woman in Scottsdale, Arizona, found this out the hard way on Thanksgiving morning. Heidi Dietrich and her two-year-old Pit Bull, JoJo, went for a walk in a local park in the early morning darkness, when the sounds of approaching hooves startled them. A herd of javelinas–a kind of wild pig–attacked. Although the pigs were probably after Jojo, he didn’t know it, and he tried to protect Dietrich.

In the process, Dietrich was knocked to the ground, where she lay screaming and crying, while listening to the fight. She was still on the ground, when Jojo returned to her. She could see that he was badly injured. She rushed him to a local animal hostpital, where he received between 50 and 60 stitches. Dietrich is convinced that the dog saved her life. She had rescued Jojo in March, and he has clearly repaid the favor. 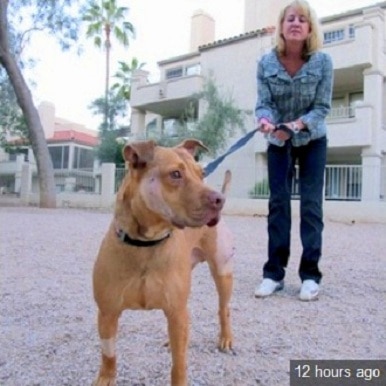 Heidi Dietrich and her two-year-old Pit Bull, JoJo, feel lucky to be alive.
Photo via lifewithdogs.tv