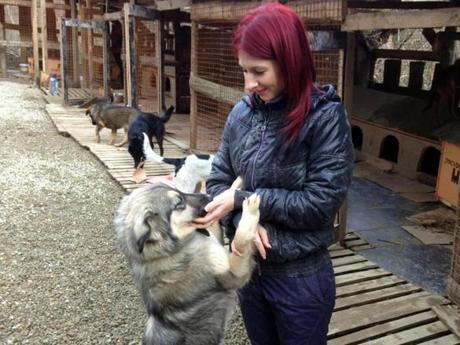 Vlada Provotorova and friends place strays wherever they can.
Photo by David Filipov, via the Boston Globe

You may have already heard the chilling pronouncement by the mayor of Sochi, where the Olympic games are scheduled to start tomorrow, that all stray dogs in the city would be killed. A story in today’s Boston Globe describes a band of heroic dog lovers trying to rescue as many of the doomed strays as possible before the “exterminators” can get them.

Provotorova said she received pictures of dogs that had been shot with poisoned darts and taken away in trucks. One of the macabre images depicted a yellow, green, and magenta dart that she said had been used. It was impossible to confirm the authenticity of the photos, which she said had come from a Sochi resident who had witnessed the killings.

A group of about 30 volunteers, all women, has been catching strays, bringing them to a shelter for medial attention and neutering/spaying, and trying to find homes. Although the realize that they are fighting a losing battle against powerful political forces, these rescuers are true heroes for their attempts to save as many lives as possible.

Click here for the video report and full story.