Last week, we told you the story of Jermaine and Jeffrey, two Pit Bull puppies at a shelter in Philadelphia looking for a new home. What made them special was that Jeffrey is blind, and Jermaine acts as his guide. A photo of the pair embracing during a nap flew around the Internet, making the brothers instant celebrities.

Yesterday, it was announced that the pair has been adopted by Jonathan Hochman and Veronica McKee of Springfield, just south of the city:

Veronica McKee says, “I saw the picture and thought what everybody else thought – that’s the cutest thing I’ve ever seen. But then I realized, despite all their special needs we could nurture that bond, provide them with the environment they needed.”
The family is overjoyed with these new additions, but perhaps a bit skeptical is the couple’s 13-year-old cat, Blabbus.

“We were just discussing that this is her birthday and this probably is not the present she’s looking for,” Veronica said with a laugh.

You can keep track of the progress of Jermaine and Jeffrey’s new, loving adventure by following them on Twitter and Facebook. 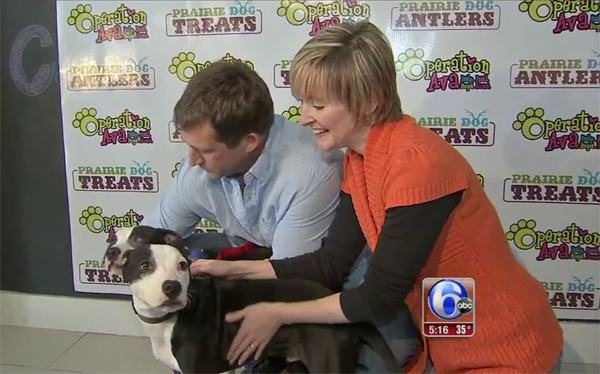 Jonathan Hochman and Veronica McKee with their new family.
Photo via 6abc.com

One thought on “VIDEO UPDATE: Blind Dog and His Brother Have a New Forever Home!”