We have posted many times about owners being refused service or asked to leave because of a service dog, despite the fact that these animals are protected under the Americans with Disabilities Act. Usually, these stories involve the police coming to the rescue of the dog owner. But recently, a 19-year veteran of the U.S. Army and his service dog were kicked off the boardwalk in North Wildwood, New Jersey, by the very authority who was supposed to protect them:

Jared Goering and his wife Sally were taking their first vacation in years, and while walking along the Jersey Shore, they were confronted by a North Wildwood police officer. He said no dogs were allowed unless they were guide dogs for the blind. Goering quickly pointed to the service dog insignia on the collar.

“The officer we were talking to didn’t want to hear anything of it,” Jared said. “He just wanted us off the boardwalk.”

Not only was the police officer wrong, but he was extremely disrespectful to both Goering and his dog, Navigator. You won’t believe what he said to the couple about service dogs and the military. This officer needs a reprimand and some serious training. 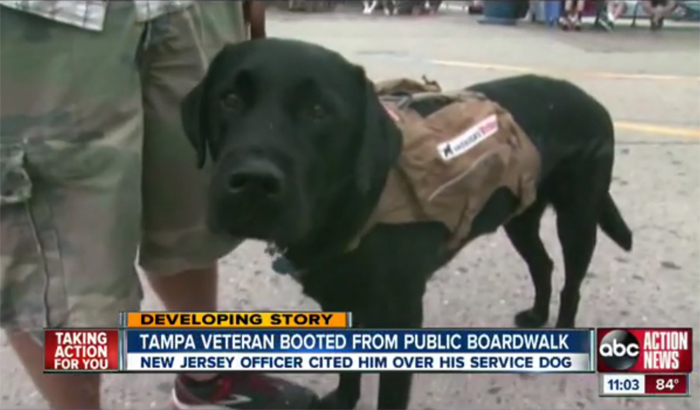 One thought on “Video: Army Veteran Kicked Off a Public New Jersey Boardwalk. . .by a Policeman!”