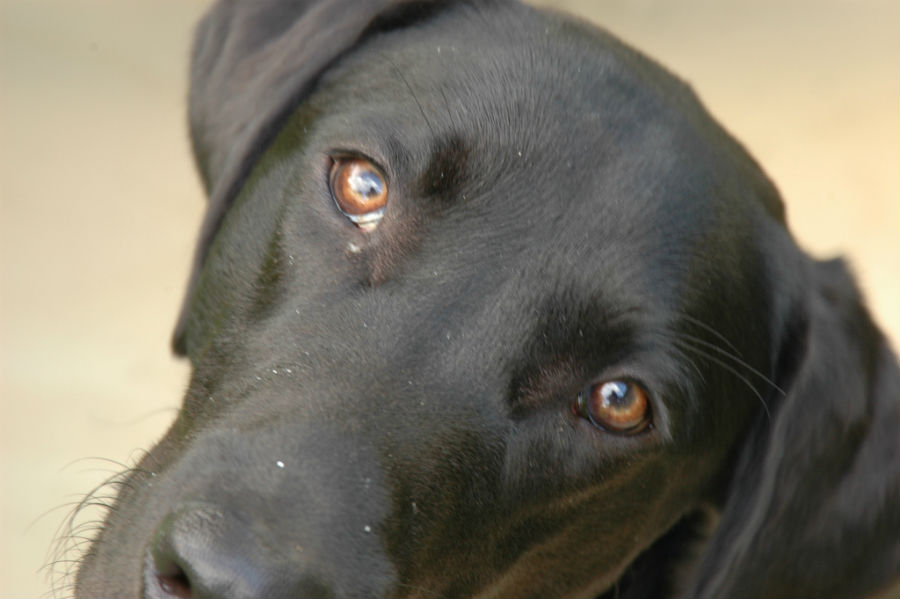 Murph’s quizzical look could have one of several meanings.

There’s something irresistible about that quizzical head cock in a dog—the tilted noggin, with her eyes and ears akimbo: she looks as though she’s listening with a mixture of attention, excitement, and curiosity, and it’s beyond adorable. While there’s no research to back this up, it’s a safe bet that some people choose to get a dog because of it—they observe a puppy tilting her head to one side and can’t wait to bring home their new best friend with this endearing habit. So why do dogs tilt their heads? There’s a scarcity of research on the subject, but let’s explore some of the top scientific theories.

Your dog’s canid ancestor, the wolf, is the source of this theory. Wolves tilt their heads when listening just as your dog sometimes tilts hers. While your dog probably tilts her head in response to your talking or making a funny noise, wolves tilt their heads when they hear the sounds of prey. It’s thought the tilt helps wolves zone in on the exact vertical placement of their quarry during a hunt. With a tilt of the head, one ear is raised higher than the other. Sound coming from rustling in nearby underbrush will reach the higher ear a fraction of a second after it reaches the lower ear, so they know their prey is down low.

For wolves, the head tilt is a behavioral adaptation that improves their ability to pinpoint the source location of a sound. Ears on either side of the head in wolves and most animals (including humans) is a structural adaptation with a similar function—to pinpoint whether a sound is coming from the left or right, and from what distance.

Canine hearing is much more sensitive than ours; they hear a far wider range of frequencies. With the slight tilt of their head they further extend the information being carried over those sound waves. Try testing this theory during game time in the yard. Does your dog tilt her head more when playing “hunting” games like hide and seek, than she does during other activities?

Dog expert Stanley Coren suggested this theory in a 2013 Canine Corner column in Psychology Today. Coren hypothesizes that the head tilt is one way your dog sees around her muzzle, which partially blocks her view. To see firsthand how her snout blocks her view, Coren suggests balling your hand into a fist and holding it thumb side up to your nose. Your fist stands in for your dog’s nose and narrows your field of vision, particularly your lower-front view. Try holding a conversation with someone with your fist before your nose and you’ll notice you can’t see much of their mouth and chin. If you tilt your head, you can instantly see more of this area.

When your dog looks directly at your face, Coren says, her muzzle is blocking the most important parts of your face for clear communication. Beyond words, your mouth communicates your emotions. It moves differently when you say “Wanna go out?” when you are angry or sad or happy. To get a quick read on your mood, the theory goes, your dog tilts her head.

Coren is the first to admit this isn’t the whole answer to the head tilt question, because a significant number of brachycephalic dogs tilted their heads as well.

Research has found dogs respond to human body language, tone of voice, and facial expressions, picking up on cues that indicate whether you’re interested in feeding them, playing, going for a walk, or hanging on the couch. The head tilt is a way of showing their attentiveness to these cues. Researchers speculate that dogs who tilt their heads more frequently are more in sync with their owners because they pick up on non-verbal signals.

If your dog tilts her head frequently, and it doesn’t appear connected to a specific noise, take her to the veterinarian. Head tilting can be the symptom of an illness, such as an ear infection, a foreign object in her ear, inflammation, vertigo, or even a more serious brain-related disease. While you can’t prevent all of these issues, cleaning your dog’s ears regularly helps minimize the risk of ear infections.

If your dog tilts her head naturally from the time she’s a puppy, chances are you’ll enjoy a lot of head tilts during your time together. Tilting her head will bring on smiles and back pats, and this positive reinforcement will make her tilt her fuzzy noggin more often. Consider it one of the delightful dividends of life with a dog.

One thought on “Why Do Dogs Tilt Their Heads?”