In the Spring of 2017, Orvis helped us spread the word about the potential loss of an iconic place in American fly fishing and casting history: The North Pond Casting Pier. Thankfully, in the year that’s passed, the casting pier remains solidly in place and more vital and busy than ever! And thanks to Orvis, we received an overwhelming response and show of support with several hundred Orvis blog readers “casting” their vote in support of preserving the pier. We wanted to take this opportunity to say a big “THANKS!” to all of you who voted and give you this brief update.

Thousands of people visited and enjoyed the pier last spring, summer, and fall. At one event hosted by the Peggy Notebaert Nature Museum, nearly 500 participants of all ages learned how to cast for the first time on the iconic pier, with the assistance of volunteers from various Chicago angling and conservation groups.

Many visitors to the pier in 2017 were museum patrons of all ages, there to take advantage of free, weekly casting lessons. Others were dedicated anglers honing their casting skills or taking a fly-casting lesson with one of the cities talented local instructors–including the popular Fly Fishing 101 seminar offered by Orvis Chicago. And others were simply taking in the soothing sights and sounds afforded by this unique urban oasis. 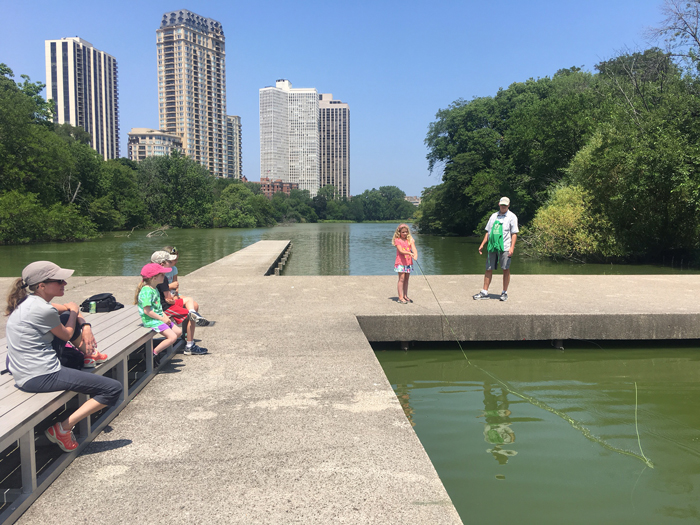 We finished 2017 by shooting a short video to introduce viewers to the North Pond Casting Pier’s rich past, present, and unique location within the City of Chicago. The video is a culmination of more than a century of casting history, the passionate care of dozens of volunteers and casting instructors, and an ever growing community of concerned anglers from Chicago and around the world, who care about the future of the North Pond Casting Pier.

As we move into 2018, the timing of any changes to the North Pond Casting Pier is uncertain with many legal, community, and financial hurdles to overcome. For this reason, it is critical that we all remain vigilant in our efforts to preserve and protect this valued and historic venue.