August is a popular time to visit and fly-fish the Madison River in southwestern Montana. The Madison can fish well during all twelve months of the year, and each month offers a different set of challenges for fishermen to solve. During August, those challenges can include warm, sunny weather; heavy fishing pressure; and in years of lean snowpack, low water. Fortunately, these are all things that anglers can overcome and have some great days out on the river. One of the things that I enjoy most about fishing the Madison, as well as fishing in general, is the dynamic nature of the sport. You can’t fish the same way in January as you did in June and expect optimal results. The ever-changing conditions on the river and the chess match between angler and trout are what keep me coming back to the river day after day, year after year. Let’s take a look at some things that you can do to maximize your success on the Madison this time of year.

Getting on the water early is a great way to beat the crowds.

Tip #1: Get On The Water Early
As a guide, one of the challenges I face during late summer is convincing my guests that it is, in fact, worth it to wake up at 5 a.m. on their vacation in order to be the first boat on the water. While this is a bit of an exaggeration, it is very important to try and get out on the water early in the day for two reasons: water temperature and fishing pressure.

As cold blooded creatures, trout’s metabolism is directly tied to water temperatures. Peak feeding temperature is thought to be somewhere in the mid 50s, so trout tend to be most active during the time of day when water temps are closest to the optimal range. In winter and spring, this occurs during the heat of the day, when water temps creep up into the 40’s. By August, this will be in the morning, when water temperatures are at their lowest point, usually around 60 degrees on the Madison River. This isn’t to say that you can’t catch fish in the afternoon, but morning fishing is almost always more productive. I usually suggest to my guests that we try to hit the water early and eat a late lunch, ensuring that we have our flies in the water when feeding is at its peak.

The other reason to get up early is tied to fishing pressure on the river. The Madison is a world-renowned fishery, and can get pretty busy in August. It is, however, what many refer to as “Montana Crowded,” meaning that it is still nowhere near as crowded as many streams on the East Coast or close to major metropolitan areas. Nevertheless, it doesn’t hurt to be the first to fish a particular stretch of water. The simple fact is that the more flies a fish sees and the more boats that pass overhead, the more wary that fish is likely to be. “Wary” doesn’t mean impossible to catch, but I like to tilt the odds in my favor as much as possible.

Dead-drifting a streamer through the Madison’s fast currents can attract big bites.

Tip #2: Drift Streamers
When most anglers think of streamer fishing, they think of the gray, drizzly days of fall or the “Green is Good” conditions of spring. However, late summer presents a great opportunity to fish streamers on the Madison. Because aquatic-insect populations are very low, trout turn to other sources for food. During June and July, there is a tremendous number of stoneflies, caddisflies, and mayflies hatching and present in the river. The trout are able to gorge on an endless buffet of nymphs underwater, so there is little need or urgency to chase small fish around for a meal. While there are caddisfly and stonefly nymphs in the river year-round, they are much fewer in number and less accessible during August, so fish are forced to look for other sources of food, such as terrestrial insects, which is why many anglers enjoy casting hoppers and ants during this time period. The other obvious choice is small fish, and here is where streamers come into play. As the hatches of early summer wane, streamers become one of my go-to strategies.

While I thoroughly enjoy stripping streamers on a sinking line, I typically fish streamers on the Madison as part of a standard nymphing rig. The current on the Madison is fast and turbulent enough to impart plenty of action to your fly when presented in a dead-drift manner. I use a strike indicator and the same leader I would when nymphing. I will also attach a small beadhead nymph as a dropper off my streamer in the same manner that you would set up a double-nymph rig. The entire presentation is exactly the same as nymphing: Simply let the current and fly do all the work instead of actively imparting action onto the fly. Because of this, choose fly patterns with a bunny fur tail that has plenty of undulation in the water. The Madison has a robust population of sculpins, so I usually choose patterns that mimic these small fish. Sculpins have wide, flat heads with very prominent pectoral fins, so look for patterns with a bulky profile up front that will push around a lot of water.

Tip #3: Downsize Your Tackle
One of the interesting aspects of the Madison is that, although it looks like a freestone stream, it is actually a tailwater. It is a sort of a hybrid fishery in that it retains some characteristics of both types of fisheries. Its large stonefly population is typical of a freestone, and it also lacks the scud and sowbug population found in many tailwaters. It does, however, have very clear water, abundant small aquatic life, and at times, picky fish. I feel that some anglers ignore the tailwater factor on the Madison and do not employ the light tippets and small flies common on other Montana tailwaters, such as the Missouri and the Bighorn. While this isn’t a big deal in June or July, as fishing pressure increases, water levels drop, and hatches wane during late summer, it becomes increasingly important. During August, I often employ 4X and 5X tippet and choose nymphs in sizes 16 to 20. My nymphing rig this time of year epitomizes the hybrid nature of the river, as it is often a big size 4 Sculpin trailed by a tiny size 18 Lightning Bug or other midge/mayfly imitation.

The one caveat is that the farther upstream you go toward Quake Lake, the more the river behaves as a tailwater and vice versa. Near the Slide and Lyons Bridge, the river demands finer tippet and smaller flies. The river here has a higher fish population, more pressure, and a greater food base. Downstream, toward Varney Bridge and Ennis, the river changes character, with frequent braids, islands, and willow lined banks. Here the river fishes more like a freestone, and you can usually get away with heavier tippet and larger flies than you would fish upstream. However, it’s still a good idea to dial things back a bit in August after the fish have seen so many flies throughout the summer. 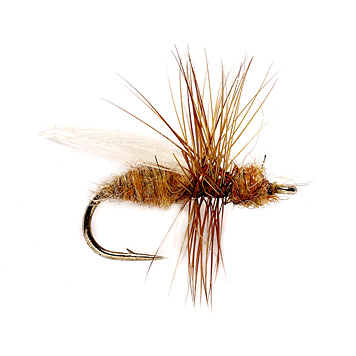 Tip #4: Revamp Your Fly Selection
As discussed above, the aquatic food base available to the trout diminishes significantly during late summer. While fishing with streamers is one specific response to this occurrence, terrestrial insects should be your go-to dry flies.

When most fly anglers hear “terrestrials,” they immediately think of hoppers, and indeed you can have some good hopper fishing on the Madison at times. However, fishing with smaller terrestrials, especially ants, can often be more productive. The trout see an enormous number of hopper imitations each season, so they tend to be a bit more suspicious. Hatches of flying ants can also occur during August, and the fish can get really keyed in on these bugs. I will often employ a double dry rig with a hopper as my lead fly and an ant as the dropper. The larger hopper pattern acts as an indicator of sorts, as it helps you to see your ant, and you just never know when a big brown will appear out of the depths and crush your hopper. A sleeper terrestrial hatch to look for in early August is the spruce moth. Look for the moths to hatch in the mornings up around Lyons Bridge, where the river is lined with evergreen trees. You can match this hatch with a caddis pattern, but I prefer a more specific spruce moth pattern, and there are many variations available at local fly shops.

For the nymph fisherman, there are two ways to look at things during August. One strategy is to choose small, bright, attractor-style nymphs that don’t imitate one specific bug but are designed to get the fish’s attention. Examples of this would be a Lightning Bug, Copper John, or Rainbow Warrior. The other strategy is to imitate the food that is in the river year-round. Due to the life cycles of the species, there are always caddisfly larvae and stonefly nymphs in the river. While trout will not be keyed in on either bug the way they are when the big hatches are going off, they are accustomed to feeding on caddisflies and stoneflies throughout the year. Every day can be different, so my normal nymphing program during August will include a variety a flies in each category in order to figure out what is working best on that particular stretch of river.