Scott Low is a touring musician from Georgia who fly fishes his way from one gig to the next throughout the U.S. We are happy to host the online world premier of his latest video, for his song “Back to the River.” The song is from his recent album, “The New Vintage,” which you can listen to and purchase by clicking here. (You can also stream his previous album, “Stole & Spent.”) He also recently appeared in the latest episode of “Anglers & Appetites,” a series on Fox Sports South, sharing the waters of his beloved Tallulah River. (See below.)

Over the years, I have been contacted by many “fishing musicians,” but I’ve usually found their music gimmicky or overly cute. Scott Low is a serious musician in the mold of, say, Ryan Bingham or Hayes Carll, and I think you’ll be impressed, whether or not it’s your preferred style. I asked Scott if he’d answer some questions about his relationship to both music and angling, and his answers are below.

1. When, where, and how did you start fly fishing?
I am really a newbie. But I guarantee that I have put more hours on a river in the past year than most. In September of 2015, I married into a kind of fly-fishing royalty by wedding the daughter of the former president of the Rabun Chapter of Trout Unlimited. I was given a fly rod and a five-minute casting lesson by said president, watched a few Orvis videos, and spent all last winter on the Tallulah River in northeastern Georgia working it out. I have now fished from Montana to Florida to West Virginia and have caught minnows to monsters. 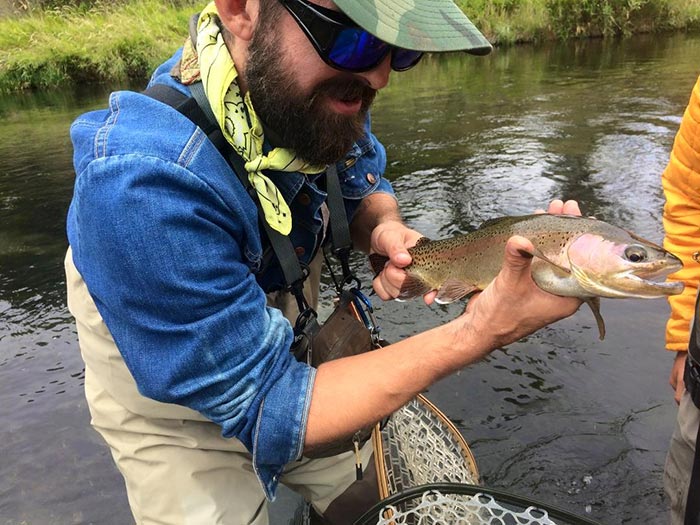 2. What’s your favorite kind of fly fishing?
I love variety, going from streamers to double nymphs to dry-droppers in a few hours. Recently, I have been hunting big brook trout in western North Carolina, and those are consuming my fishing brain. But the rivers and creeks that surround my home in Rabun County, Georgia are my home waters, and I learned there and love them. It’s hard to talk of them now, as water levels are low, which explains why I have been going to North Carolina.

3. Do you see a relationship between your loves of music and fly fishing?
You know the metronome in that one fly-fishing movie? It really is true. Rhythm and flow really help with casting and fly placement. I had a guide in Montana who was shocked by how well I could cast after such a short time, but I think that my sense of musical timing is part of why I picked up the casting motion so quickly. But I also feel that the patience and inner conversations that go along with fishing are also large part of songwriting: Waiting for the right melody or the right gig or the right hatch or best audience, enduring hours or weeks waiting to land that one big one makes it all worth it.

Being able to shrug off a bad gig is just as important as shrugging off getting skunked as your buddy rakes in fish. It’s all about being able to keep that optimistic perspective and believing in your skills to make it to the next fish or stage. Or at least having the control to rein back in the frustration to go and put on a great show the next night. 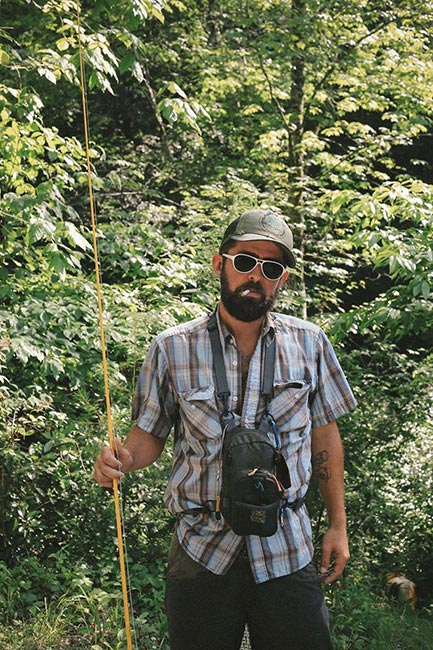 A portrait of the musician as a young angler.
Photo by Josh Brown of Wander North Georgia

4. Is it hard, as a touring musician, to find time to get on the water? How do you deal with that?
I think I’m gonna write a protest song about how I need a national fishing license. Just kidding…kind of. One of the hardest parts is pulling myself off a river, so I don’t wear myself out for the gig that night. Also I have had a couple instances when I have driven a couple hours only to find a river flooded or too low for good fishing. I try to do some research, but not having local knowledge about the water levels or hatches or access can get rough. I try to plan days off when I’m performing in good trout areas. I just had a 14-day tour, and scheduled in two days of fishing in West Virginia.

5. Do you see a relationship between your loves of music and fly fishing?
The video we are debuting here, “Back to the River,” was actually written before my fishing problem/addiction started. I wrote it about getting back to the good things in life and accepting the hard times. Keeping the good things in your sights and moving past the difficult times, I guess, is really what fishing is about. I would say the lessons and tribulations of angling definitely creep into songs, and they usually parallel life’s issues. I have never really thought too much about fishing songs, although “Fishin’ in the Dark” by Nitty Gritty Dirt Band is a great song!

One thought on “5 Questions with Scott Low: Fly Fishing and Music, Plus a World Premier Video!”