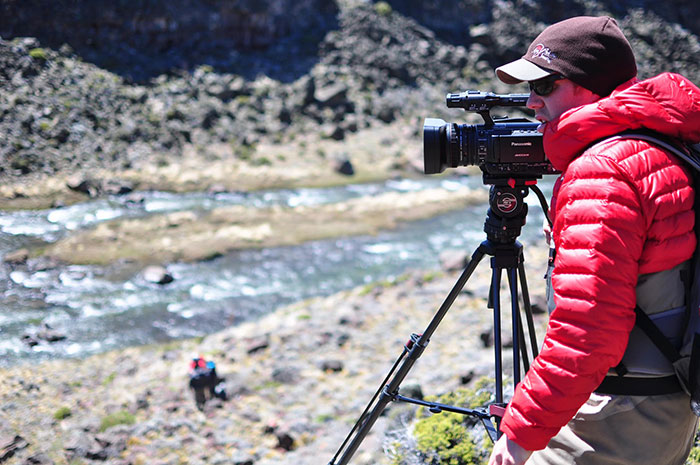 Todd Moen sets up a shot for one of his popular fly-fishing films.
Photos courtesy Todd Moen

Seven years ago, Todd Moen co-founded the online fly-fishing photography publication Catch Magazine with Brian O’Keefe, and he shoots the films for the magazine’s T-Motion Theater. To find compelling subject matter, he travels the world to film amazing anglers and rivers. Todd submitted to our five questions about how he arrived at his present calling.

1. When, where, and how did you start fly fishing?
My dad is from Montana, and our family made annual trips there and to Yellowstone National Park. It was in Montana at about age 10 that I really became interested in fly-fishing, and my dad and I pretty much switched from spinning gear to fly-fishing gear. When Creekside Angling Company opened near my home in Issaquah, Washington, in 1993, I was a regular visitor and immersed myself in learning the world of fly fishing. After high school, I moved to Bozeman, Montana, and attended Montana State University, from where both my parents had graduated in the 1960’s. There I became a fly-fishing guide through my college years and took to the rivers every chance I got.

2. How did you become a fly-fishing filmmaker (photography background & fishing background)?
When I was a young man, I had an old JVC pre-handicam thing on me all the time, and I became known for putting together these fun videos that would recap good times with my buddies. As the technology became more accessible, I was able to edit this footage in new ways to tell the story right. When I moved to Montana, my boss at Lone Mountain Ranch often asked me to come along and film his clients’ day of fishing, rather than guide, so that I could create a memento for the angler. 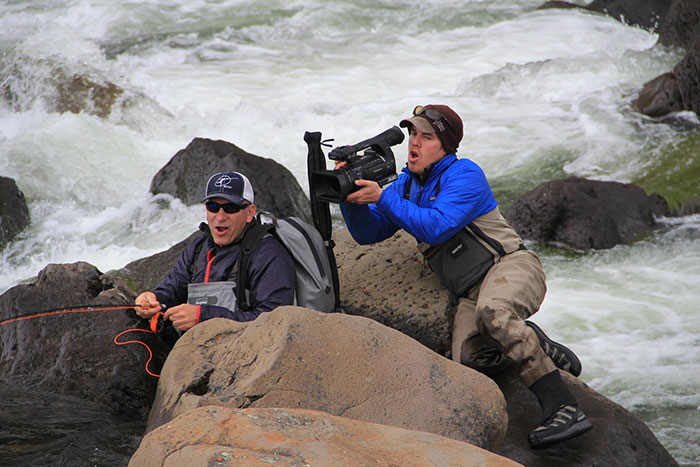 Todd makes his camera part of the action, which translates to a more compelling viewer experience.

I got my first underwater housing for my camera in about 1994, and I eventually became focused more on filming fly fishing than on guiding. My big break, and true learning experience, came when my wife and I moved to Missoula and I was hired by a fly-fishing film company to tour the world as a camera operator, filming for CBS and Outdoor Life Network. I filmed celebrities and world-class anglers for “Fly Fishing the World” and “Primal Quest”—filling my passport with stamps from more than 15 countries in the process. I learned a great deal about camera gear, filming on water, and working in various weather conditions. I even learned how to survive a plane crash in the Bahamas.

3. What are you looking for as elements of a good film?
One of the more important elements of a good film is real weather. No one wants to see bluebird skies and perfect fishing weather all the time. The various moods and seasons of challenging weather make fly-fishing films interesting. The average angler hasn’t waded in 38-degree water for steelhead in a winter blizzard, and showing the harsh and crazy conditions allows folks to experience it in their cozy armchair at home. I’d say that what makes a good film are real weather, interesting locations, good anglers, creative camera work, the perfect music, and a story people will want to hear.

4. What are the biggest challenges facing a filmmaker trying to capture the fly-fishing experience?
Well, the fact that a fly-fishing filmmaker must depend upon a wild species at all is absolutely the biggest challenge. It’s not like filming an actor or actress, or a trainable dog. Fish are wild. Period. When I am rolling camera on an angler in the water, I’m just hoping that perhaps the fish will decide to perform. The weather is another huge challenge. You can’t control it, and often the best fishing happens in the worst weather. Finally, the biggest challenge in filming fly-fishing is actually capturing the right moment on film. It takes a lot of rolling, a lot of b-roll, and an absolute attention to the details. As I’ve told all my friends who think I get to “go fly-fishing for my job,” I’m not actually fishing ever; I’m filming. If I have a fly rod in my hand I will miss the story. So, I guess another challenge is admitting that I was once a fly fisherman first and a cameraman second, but now I am a cameraman first and only. It’s a sacrifice I’ll make for a while, I guess.

5. What advice could you give a beginning filmmaker–or even just the average guy using an iPhone or a GoPro–on making a better video?
We have ever more affordable high-tech equipment available these days, and anyone can pick up the gear and go be a videographer. The real talent, in my opinion, is in the editing, the shaping of your footage. If you want to get into filmmaking, don’t overstock your equipment room with the newest and best gear. Get to know your subject. Spend time editing and learning editing programs. Put in your time and stick with it. Two big points of advice I’d give: get the steady shot, and when editing…always, always get the music right!